It’s been a long time coming but the feeling around Tallahassee is that the Seminoles football program is back. Ranked #7 in the preseason polls, Florida State looks to stay healthy and return to a seat atop the ACC Atlantic division. For many Seminole fans, the ultimate prize in 2012 will not only be a conference title or even a berth in a BCS Bowl, they want the ultimate prize and think a BCS Championship is in the realm of possibilities.

The Jimbo Fisher Era
After a disappointing 7-6 season in 2009, Florida State’s legendary coach Bobby Bowden hung up his whistle and Jimbo Fisher took over the duties from his mentor. Fisher had been with the Seminoles since 2007 as Offensive Coordinator and took on a role as head-coach-in-waiting as Bowden’s career came to a close. The decision proved to be a good one for the Seminole Athletic Department as Fisher immediately led Florida State to a 10-4 record and the ACC Atlantic Division Championship. 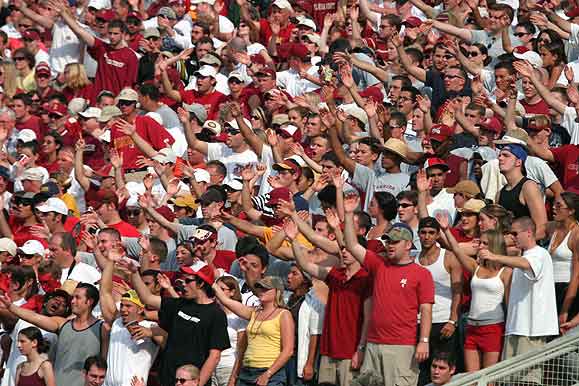 2011 Season
Florida State had to replace QB Christian Ponder who was a 1st Round pick in the NFL draft but they returned 15 other starters to their 10-4 ACC Atlantic Division Championship Team. FSU Entered the 2011 Season ranked #6 in the preseason AP poll and hopes were high for a BCS Title berth. The ‘Noles were on track after the first two weeks of the season, outscoring their opponents by a 96-10 margin. Week 3 of the 2011 Seminole season marked the beginning of the end for any BCS Title hopes. FSU lost a battle with #1 ranked Oklahoma 13-23 but the residual effects of that game were devastating. The ‘Noles lost back to back games 30-35 at Clemson and at Wake Forest to catapult them all the way out of the AP Top 25.

The 2011 Seminoles showed resiliency, even in the wake of 3 crushing defeats. They went on to 5 straight games averaging over 35 points per game and had found themselves back in the polls at #23. Unfortunately, a hiccup loss at home to Virginia 13-14 would culminate a season of disappointment even though FSU went on to beat Florida for the Governer’s Cup and Notre Dame to win the Champs Sports Bowl.

2012 Season Preview
Sometimes tough losses have to occur in order for a team to be brought back to Earth and realize their own mortality. That’s the mantra for the 2012 ‘Noles as they realize they must have their heads in every game in order to avoid losses like those to Virginia and Wake Forest in 2011. 17 experienced starters returning should make that a reality.

The 2012 Florida State Football Team will be defined by a devastating defense. Ends Brandon Jenkins and Bjoern Werner combined for 15 QB Sacks and headline the defensive front line that was #2 in the country in run defense. Jenkins entertained thoughts of leaving FSU for the NFL but returns for his Senior Season to build on career totals of 21.5 sacks and 36.5 TFL, tackles for loss. The other bookend Werner is a 6 foot 4, 255 pound German who bull rushed his way to 7 sacks and and 11 tackles for a loss a season ago.

While some strong defensive teams win in spite of their lackluster offense, the 2012 Seminole offensive unit look to directly contribute to the team’s BCS hopes. Returning for his final season at the helm of the offense is 5th year senior E.J. Manuel. A staple on preseason all-conference and ‘to-watch’ lists, Manuel owns the Seminoles all-time high in completion percentage at 66.1 percent. He’s enjoyed an offseason working with the same QB coach who has helped develop the last two NFL #1 draft picks Cam Newton and Andrew Luck. If Manuel hopes to make it 3 in a row, he must stay healthy and have help from a young offensive line.

The running game looks to be strong for the 2012 ‘Noles with Chris Thompson returning from a season-ending broken back in 2011. He’ll be joined in the backfield by 2011’s leading rusher DeVonta Freeman to make a formidable duo that can keep each other fresh. A top newcomer is WR Marvin Bracy who had entertained thoughts of running in the London Olympics until nagging hamstring issues kept him off the team. Getting the ball in this six time Florida state sprint champion can result in some magical occurences.

The 2012 Seminoles are definitely built to win now with an imposing defense, experienced quarterback, and deep running game. The schedule sets up nicely without a non-conference game against a top-ranked opponent like the 2011 game against Oklahoma. Plus, division rivals Clemson and Florida will both travel to Doak Campbell Stadium and a clear path to the ACC Championship game is in the cards…of course ‘Noles fans want more than that.

Our Florida State University Seminoles College rubber Stamps are very popular with college students. In fact at simplystamps.com, we offer a large variety of rubber return address stamps that can be personalized to fit your individual needs. You can also make your own stamp and personalize it with you logo, name, and address. Not sure if you like our design? Upload your own design and we will make rubber stamp for you. If you are big fans of college football, use Coupon code FSU12 to save 20% on any of our products. With orders over $75 the shipping is Free!