For 2013, the Ford Flex has received some significant updates. The styling of the exterior has been updated to produce a bolder look and there is a long list of new features and options to provide the consumer with more value for their money. Although the Titanium trim level has been discontinued but the SE, SEL and Limited still provide consumers with a great choice of Flex vehicles with the options and accessories they need. The Flex is designed to be an updated version of what was formerly known as the “station wagon” and vertically challenged SUV, placing itself somewhere in the crossover section of the vehicle market. 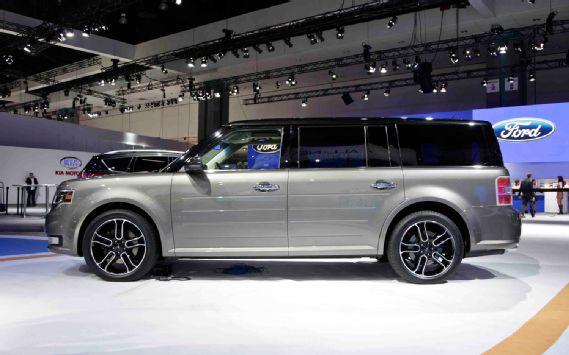 For 2013, the Flex will have two engine options, the upgraded 3.5-liter Ti-VCT V6 is available in all three while the 3.5-liter turbocharged V6 EcoBoost engine is optional in the Limited. The standard 3.5-liter Ti-VCT V6 produces 287hp ad 254 ft. lb. of torque. The Ti-VCT stands for twin-independent variable camshaft timing, which controls the opening and closing of valves to increase performance. Fuel economy is average with and EPA estimated 18 mpg city/25 highway. Flex models with the standard 3.5-liter are equipped with a 6spd SelectShift Automatic transmission. It features a shifter button that allows the driver to override the automatic option and drive it in a more sporty feeling manual option instead. While front-wheel-drive is standard on all trims, the SEL and Limited have the option of AWD.

The optional 3.5-liter EcoBoost V6 combines direct injection with turbocharging to produce the performance of a V8 while maintaining the fuel economy of a V6. It is capable of a quite impressive 365hp and 350 ft. lb. of torque across a wide 1,500 to 5,000 rpm window. With the increased performance, there is a slight decrease in fuel economy, but it is still far better than a V8 of the same horsepower. Fuel economy for the EcoBoost V6 is an EPA estimated 16/23 using premium unleaded gasoline. The Flex Limited also features the 6spd SelectShift automatic transmission, however it uses steering wheel mounted paddle shifters in place of the gearshift. The Flex Limited is available in a front-wheel-drive or AWD setup.

Interior standard features and options are abundant, although the SEL and Limited trims seem to get a little more than the base SE. With this being said the SYNC system is available across the board as well as power seats (6-way or 10-way depending on the trim), tilt wheel, extra 12V power points, MyKey keyless entry, rear auxiliary climate control, AM/FM/CD stereo, Ice Blue interior lighting, battery saver, privacy glass and cruise control. Exterior features have also increased over previous models with the Reverse Sensing system standard on all three trims as well as the EasyFuel capless fuel filler, power door locks, and many other features. One unique option that is only available on the SEL and Limited is the Vista roof. It is a group of four skylights that cover all three rows of seating with a power moonroof over the first row, two openings for the 2nd row and a large single skylight over the 3rd row.

Overall, the improvements to the 2013 Ford Flex have made a difference. The ride now feels more like that of a luxury car than just another crossover. The base V6 provides adequate horsepower, but the addition of the EcoBoost engine option with the paddle shifting capability turns the Flex into much more of a sport wagon than any of its predecessors. The ample glass and increased technology also help to make this vehicle much more maneuverable and comfortable to drive. Ford has succeeded with the improvements, and brought the “station wagon” into the modern age

Article presented by Chris Riley on behalf of GearHeads.org, known for their edgy style and delivering the latest in autonews.