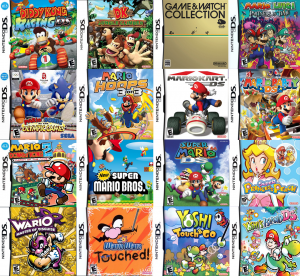 Now that E3 is over, it’s time to take a look at some of the recently announced titles and start planning your holiday-season spending. This year is going to be a great one for gamers!

This year’s release schedule is, quite simply, stunning. All three of the major players in the gaming space have really pushed to bring good games to stores this year and Nintendo is no exception. The DS and 3DS may be established handhelds, but Nintendo knows that to hold the attention of gamers after the rise of the iPad and the upcoming release of new consoles that it will have to offer some great games to its customers.

The standard DS is not seeing a lot of games being designed for it these days, but the 3DS release schedule is full of games for all ages and tastes. From mature fighting games to relaxing farming and crafting titles, there’s something for everyone. Now is a good time to sell Nintendo 3DS games, or trade them in for in-store credit, so that you can pick up some of the following awesome titles on release day.

The Legend of Zelda: A Link Between Worlds

It’s been a long time coming, but the classic SNES Zelda game finally has a worthy successor. The Legend of Zelda: A Link Between Worlds is the first game that has been developed from the ground up for the 3DS. The big new feature for this game is the ability to turn into a “drawing” to explore dangerous dungeons without being detected. This game is scheduled for a holiday-season release. The exact date has not yet been confirmed.

Project X Zone is a hybrid fighter/strategy game made by an all-star team of Japanese developers and featuring characters from the Namco, Capcom and SEGA franchises. This game is a dream come true for core gamers. Project X Zone is scheduled for release this summer.

Rune Factory 4 is a charming and enchanting title from Xseed games. This title adds some new romance options and allows you to select a male or female character at the start of the game. You can spend your time farming, cooking or crafting, manage a village, tame monsters or go out and battle. The choice is yours. Rune Factory 4 is set to be released this summer and will definitely hold your attention during the summer holidays.

Super Smash Bros for the Nintendo 3DS is the latest addition to the Super Smash Bros series of games. What makes this particular game special is that it is the first time that the series has ever been released on a handheld device. Super Smash Bros for the 3DS is being developed by Project Sora and Namco Bandai. The game will feature fan favourites from the older games in the series, as well as some interesting new additions such as Mega Man and the Villager from Animal Crossing. There’s no definite release date for this title yet.