Virginia Beach is perfect for summer fun any time from June through August, but during several weeks of the summer, the city comes alive with festivals. From cars and art to music and patriotism, there’s a festival in this city for almost anyone during the warm months.

The wonderful beachfront location of this town and the great summer weather makes it perfect for summer festivals. The days are long and sunny and the evenings are warm, creating the ideal atmosphere for live music, dancing and celebrating late into the night. 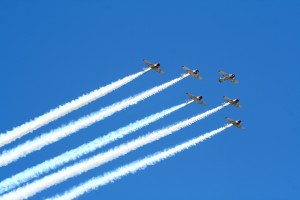 After you find a hotel in Virginia Beach, go check out some of the following festivals and attractions!

What could be more fun in the summertime than dancing to great music on the beach? Every year in August Virginia Beach hosts FunkFest Festival, which is a musical festival that celebrates the funk style of influential legends such as George Clinton, Sugarfoot’s Ohio Players, Sly and the Family Stone and James Brown.Funk originated in the 1960s as African-American musicians started putting together the sounds of jazz, R&B and soul into a genre that was great to dance to. Funk paved the way for house music, hip hop and disco.

The event is free and is held in Virginia Beach at the 24th Street Stage. In addition to the live music you will find food, dance contests and FunkFest merchandise. It’s a great event for the whole family to enjoy some excellent music.

The skies above Virginia Beach are lit up every September 14-16 with a spectacular display of jets and aircraft during this late summer festival. The annual Oceana Air Show has been held every year since 1953 and it is a thrilling event for aircraft fans. Flight demonstrations, pyrotechnics and even parachute shows are some of the spectacles you’ll see at the Oceana Air Show.

The show also includes performances from the U.S. Navy Blue Angels, a tradition that dates back to 1946. Past performers in the festival have included the Horsemen FlightTeam, Roger Buis and Otto the Helicopter, Bill Leff and Bob Carlton. The festival also includes several impressive contemporary aircraft demonstrations and even appearances of historic aircraft.

In addition to the air show, the festival also includes Kids Fest, where your little ones can enjoy plenty of activities including a bouncy castle, sumo wrestling, climbing the rock wall and much more. Kids can attend the KidsFest area for $10 per day, which includes games, face painting and most of the activities.

This festival began back in 1973 and it is an annual celebration of the culture of Virginia Beach. Thousands of people come to this celebration on the boardwalk to join in the party. The festival is centered around Neptune Park which is where the large 34-foot cast bronze statue can be found, but other events are scattered around the city.

The Neptune Festival includes many events all throughout the month of September, including the North American Sand sculpting Championship, The Surf Classic, Neptune’s 5K Run, The Atlantic Regatta and much more. This festival also includes a wine festival which showcases excellent local Virginian wines at Neptune Park.

One of the best-loved festivals of the year in Virginia Beach is the Pungo Strawberry Festival, which takes place on Memorial Day weekend every year. This festival is so popular that it attracts more than 100,000 people to the area within two days. If you are a fan of strawberries, this festival is a must. You’ll get the opportunity to taste your favorite berries in every form from smoothies to shortcakes to pies to freshly picked berries.

This festival celebrates the Armed Forces and includes two days of concerts on the first two days in June. There are also military displays along the Virginia Beach ocean front. The live music is usually supplied by some of the hottest names in country music and the 2012 festival featured Miranda Lambert and American Idol Scotty McCreery.

All of the events at the Virginia Beach Patriotic Festival are free and open to the public and some select reserve seating is available for purchase at the concerts.

These are just a few of the great festivals that summer brings in Virginia Beach, so why not come and join the party?

About the Author: Laura Dean Simpson is a freelance travel writer and blogger who also updates an online guide about festivals throughout the USA. She loves to attend great summer festivals every year.