One of the things I’ve noticed in my travels is the way in which hotels grow and change to meet the needs of patrons. More specifically, the ways in which technology inevitably affects all industries including one that has been around for thousands of years: hospitality.

I have an unfortunate tendency to want to bring as much as possible with me when I travel. Twelve hours before any flight you can find me trying to cram clothes, CDs, and multiple pairs of shoes (never know who you might meet) into a laptop bag or other comically small piece of luggage. Then there’s entertainment: a Nintendo DS, a PlayStation Portable, Kindle, Droid X, Macbook Pro and an iPod for starters. Fully charged, I could probably run a power plant with all the electronics I’m packing.

And I’m not the only one.

Travel has become an extremely high tech industry from the airport to the hotel and those who work in hotels have banded together to form the Hotel Technology Next Generation, a global trade association whose mission is to enhance deployment technology in hotels. This year marks the 10th anniversary of its founding.

I didn’t realize it until recently, but technology plays huge role in hospitality. Wi-Fi access, management software, booking platforms and the rest would not be possible without comprehensive technologies powering them. Next month, leaders from the hospitality and technology industries will converge in the American Midwest to discuss the past years innovations and what to expect in the future.  Naturally, the event will take place in a Chicago hotel.

The 8th Annual Hotel Technology Next Generation conference will take place during the first week of April in Chicago and pull together thought leaders to discuss issues of how to use technological innovations to enhance the entire experience of hotels from booking to checking out. It’s not a consumer show so there will be no flashy displays or juicy tech demos a la CES or MWC. But the topics presented at this conference will likely have real impacts on the lives of travelers. For example:

The HTNG conference is more of an industry even than a consumer event, however it’s likely that we’ll see the fruits of these conversations in Chicago the next time we check into a hotel. 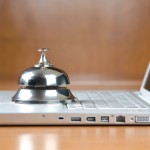