Posted in Lifestyle
Author: Editor  Published Date: November 10, 2012  Leave a Comment on A Brief History Of The Swimsuit

In ancient times everybody swam naked – it was easier to just disrobe and plunge straight in when you wanted a dip – as long as there weren’t members of the opposite sex around, of course! However, by the late 18th, train travel and a growing interest in outings resulted in a tentative mixing of the sexes on public beaches. Enter the ‘bathing gown.’

This monstrosity had weights sewn into its hem to stop unseemly lifting of the dress. Obviously men could no longer romp about in the buff with women present, so they too had to have a swimsuit. This was made of wool and resembled a set of long underwear. Men’s swimwear remained much the same until the 1920s or so. 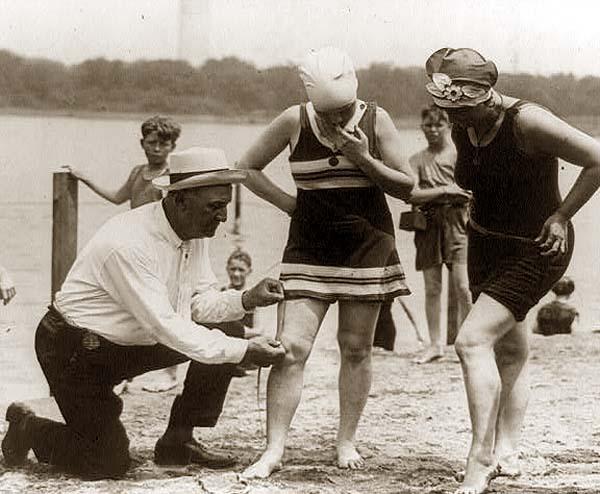 19th Century
In the 19th century the two-piece swimming costume for women arrived. This didn’t have weights in the hem but it was a lot of clothing as it comprised a knee-length dress worn over trousers and leggings that reached to the ankle. Versions of these shapeless ensembles hung around until 1907, when Annette Kellermann, an Australian ‘underwater ballerina’, arrived in the US in her scandalous, one-piece form-fitted swimsuit.

Annette was arrested for indecent exposure as her suit showed her arms, legs and neck, so she redesigned it to cover arms and legs and, even gave it a collar. In the 1920s she marketed The Annette Kellermann Swimsuit amidst great uproar. However, once Annette Kellerman had broken ground with her figure-hugging suits these swimsuits became the norm for women in the early 20th century.

The Rise of the Bikini
Nowadays most fashion houses produce swimwear lines that follow the accepted fashions of the day. There are, however, two designers who consciously revolutionised the swimsuit. The first was Louis Réard, the French engineer who designed the bikini. Réard named it after the Bikini Atoll where the US tested their nuclear weapons, as he believed his swimsuit had a similar ‘explosive’ effect. His models refused to wear it, so Micheline Bernardini, a nude dancer, had to be hired to sport Réard’s creation at the showing for the press at Piscine Molitor in Paris, in July 1946.

Men’s swimwear since the early 20th century shrunk alongside women’s swimwear until, in the 1990s, it began to get bigger again with the rise in popularity of ‘board shorts.’ Nowadays, men and women wear pretty much what they please on the beach and nobody notices – or really cares.

There is no doubt that the most iconic moment in the history of the swimsuit happened in 1962, during the movie Dr. No, when Bond girl, Ursula Andress, came out of the Carribean in her famous handmade bikini. This same bikini sold at auction for $60,000 in 2001! Which surely makes it the most expensive swimsuit in the history of swimsuits.

With swimwear now a big industry, why not check out some of the latest looks from designer swimwear specialists Beach Cafe.