The need for a more eco-friendly attitudes and new methods of finding ways to improve and sustain the environment. These initiatives are finding their way into many different avenues of our lives, with growing environmental awareness on how we come to the end of them.

That’s right, funerals are one of our last chances to do our bit for the environment. This isn’t a new idea, of course, and I certainly remember an uncle who said to scatter his ashes on the roses as they’ll come up lovely. Greener funerals have been growing in popularity in the last few years, as we’re becoming more educated about the impact we have on the world around us. 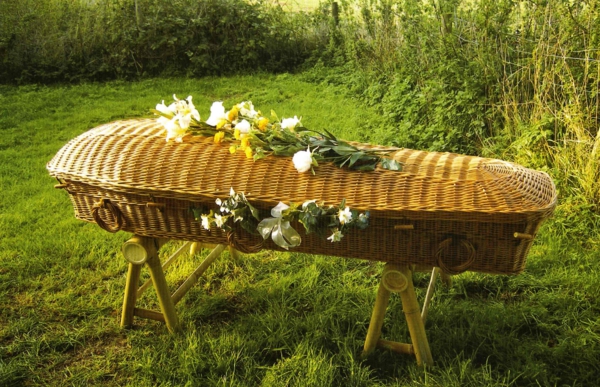 One of the ways that we can have a more environmentally friendly funeral is the choice of coffin. Traditionally, hard woods are used such oak or pine, which cannot be reclaimed afterwards for obvious reasons. There are a few alternatives to the traditional coffin, and some of these aren’t just for environmental reasons, but cost effectiveness too.

The cardboard coffin isn’t that new an idea, and they have become increasingly popular, which is primarily due to cost. The reason why many cardboard boxes are chosen is primarily because people are aware of them as an alternative. When they hit the headlines more than a decade ago, the headlines in the press mocked or pretended to be appalled. The thing is for many of us, this is the last step in our lives, and while some may prefer something more classic, others will prefer a more frugal approach.

Many wicker coffins are created from sustainable willow trees, which gives them a head start on the environmental front. However, wicker coffins can also be made from bamboo and other tree derivatives that can be woven. They tend to require less treatment than traditional wood caskets, so even creating the coffin is less detrimental to the environment. The wicker coffin industry is growing more popular because of the softer look than hard edged traditional coffins.

A fairly new concept, the woollen coffin has grown in popularity because of the general importance of environmentalism as an issue. In fact, over the last year, the sales of woollen coffins in Britain shot up by 700 per cent! However, this can also be attributed to the fact that Prince Charles, Prince of Wales has been very vocal about the environmental benefits of wollen coffins, he even had examples of the caskets put up on display in the grounds of Clarence House to promote the idea.

Wendy Yarn and other yarn types can be woven tightly to make woollen coffins.  Pack Lane Wool have a host of yarns available however their products are perhaps a little more suited to the currently living.