Posted in Entertainment
Author: Editor  Published Date: November 11, 2012  Leave a Comment on A Halloween Horror Rise Of The Roaches

When it comes to Halloween, some people spend the month watching slasher flicks. Don’t get me wrong, I love to see dumb teenagers getting hacked up in the woods by some psycho with mommy-issues.  I’m also a sucker to see hot chicks showering nude in the dark and then getting chased like it was the special Olympics where they are competing for a gold medal for how many times they can trip and fall. But my personal favorites are bugs! All sorts of insects and creepy crawlers that some how manage to breed, strategize and dominate the human race. I guess I’m fascinated because I work in the pest control industry and every now and then I’ll fantasize that some shit like that will one day come true. And if and when the insect apocalypse comes, you can bet your ass that I have the weapons to declare victory!

When people ask me what my favorite insect horror movie is, these always assume it’s The Fly. I like The Fly. I think the 80’s remake with Jeff Goldblum far surpasses the original (even though the sequel is the drizzling shits), but those films really don’t strike a nerve because I have no desire to become a fly myself. Really? Who wants they’re features to be deformed and crave dog shit from a dumpster? 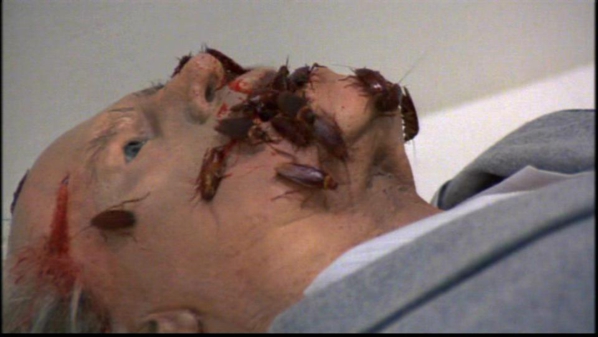 One of my personal favorites is a simple 1982 short story in George A. Romero’s cult classic Creepshow. The final story , “They’re Creeping Up On You”, features E.G. Marshall as  George Pratt,  a ruthless tycoon  who  suffers from a severe case of mysophobia and confines himself to his New York City penthouse apartment while the city suffers from rolling blackouts one evening. Karma proves to be a real bitch that night as his apartment is overrun by thousands of aggressive cockroaches.

You might wonder what the first thing that comes to mind is when I see that movie, and to be quite honest, it’s… “I could score a fucking fortune taking on that extermination job!”

But in all seriousness, I think it’s the social commentary that strikes a chord with me. Those roaches represent all the little people that this douchebag ruthless businessman steps all over to make his millions. People like that look at people like us as if WE ARE pests to their society. But just like roaches, the little guys are always stronger once they prove that there is power by numbers. When they stick together and fight for a common cause, anything is possible.

I also look at it as a social commentary on invasions. Here we are, the human race, with all of our intellect and weaponry bullying the small and helpless who are only looking to survive. Does that mean that I sympathize and want o live with roaches? Fuck no! Save that for the dirty motherfukers who believe in reincarnation!

My point is, I like the sense of realism. Do I think that one day I’ll live to witness the rise of the roaches? Probably not. But as a horror movie fan, I absolutely love going to war against them on a daily basis and blasting their asses with whatever chemical warfare I have in my tank. I think to myself, “I saw that shit you pulled in Creepshow! That’s not happening up in here… NOT UP IN HERE!”

Daryl Williams is an avid horror movie fan who currently works for a Danbury exterminator in CT. He is currently working on his own screenplay about an insect invasion.