A ‘Gem’ Of A Culture

Ancient Egyptians were identical to people of today in two ways:  They were very thoughtful about how they looked to themselves and others;  and they loved beautiful jewelry!  Perhaps one could label their culture as vain since most households, surprisingly, had one or several polished mirrors for self-adoration.  But why not, since their admiration of their  incredibly detailed, stunning jewelry would’ve been quite expected.

Both men and women adorned their bodies with opulent pieces of jewelry; and the type and intricacy of the items reflected one’s social status.  For what it’s worth, women AND men wore make-up, as well. 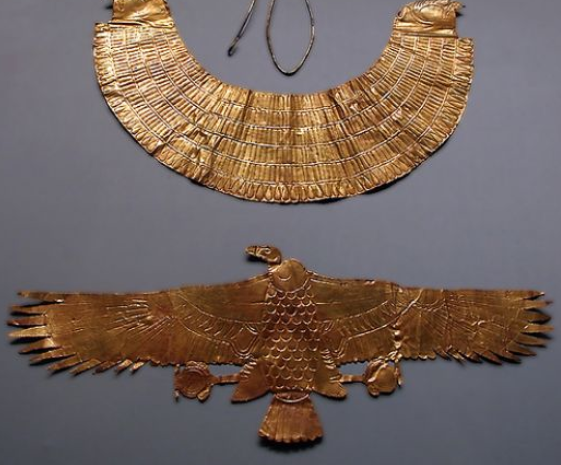 Clear evidence of jewelry-making in this ancient part of the world, dates back at least 8,000 years ago.   Initially,  jewelry within the Egyptian culture was crafted from simple things from nature including branches, shells, beads, bones and stone. As jewelry-production  became increasingly sophisticated,  artisans  developed a fine eye for exquisite detail ; and the more intricate the piece of jewelry, the more influential and wealthy the proud wearer was known to be.

Obsessively extreme value  was placed on a variety of sacred objects; and gem-embedded gold and silver  played a very significant role in that type of covetting mindset. Intricate jewelry, also, symbolized not only the Egyptian Pharoah’s own professed glory, power, religion and dominance, but it reflected the immense wealth of the culture, as a whole.

WHAT Kind of Beetle?

Probably one of the more interesting aspsects of ancient Egyptian jewlery has to do with how jewelry was perceived for those who were deceased and had passed onto the  ‘afterlife’.  This brings our attention to none other than the dung beetle referred, in ancient terms, as scarab.  This little winged insect was engraved on necklaces, bracelets, wrist cuffs and wide, decorative collars.

Scarabs symbolized renewal; and that renewal was based on a simple, unappetizing scenario:  the scarab  would roll animal dung (hence: dung beetle) into a pefect little ball to serve as  home for the beetle’s eggs.  When the larvae hatched, new beetles would emerge.  This “rebirth” became a potent symbol for eternity to ancient Egyptians.  In their minds, it had everything to do with the afterlife; and what better way to celebrate that than through the dung beetle……

Consequently, much of Egyptian jewelry was adorned with scarab amulets which were commonly placed on the body of a deceased person, under the mummy wrapping.  The amulet  was believed to protect the heart of the person travelling to the afterlife. Other jewelry pieces were used to ward off evil spirits and/or the wrath of multiple gods.

Gold was sought and covetted as a first-choice metal and was used extensively.  Color was added to crafted gold, silver, and bronze pieces with the use of inlayed colored glass and a variety of gems.

Jewelry production and possession was monumentous for the ancient people of Egypt. What is striking and noteworthy, is how many of the designs, today, are inspirations from the very styles worn by god-like Pharoahs and  Egyptian Queens, more than 8,000 years ago!

K. Carlson writes on the topic of custom jewelry and brands like Scott Kay.