Howard Andrew Williams sung Moon River; he also sung hundreds of other songs and had a global TV show in the 1960s and 1970s. We know him as Andy Williams who was born in 1927. By the early 1950s he was signed up to RCA and appearing regularly on a chat show and was starting to have hit records with that beautiful mellow voice.

It was 1961 when he had I Can’t Get Used To Losing You, but this man would be a big star in the 1970s too. As by 1973 he had got 18 gold albums and was at one point out selling Elvis. The Emmy award winning Andy Williams Show was a global show that ran from 1964 to 1971 and introduced the world to a group called The Osmonds. It also introduced us to the Cookie Bear. 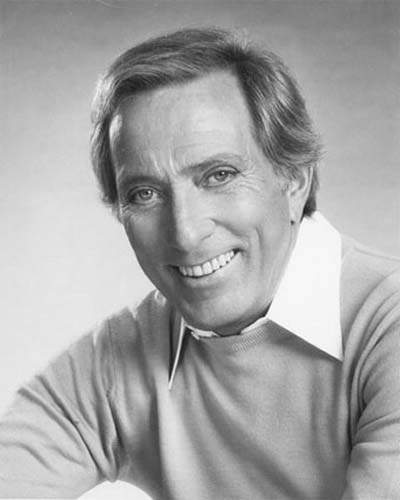 In the U.S. Andy has had sixteen top thirty singles and fourteen in the UK. His first hit to enchant us in the 1970s came with Can’t Help Falling In Love and then It’s So Easy, both of which charted high in the UK but did not get released in the USA. One Day In Your Life was a U.S. hit only that year, but the next single would be huge on both sides of the pond and that was Home Lovin’ Man.

1971 would be would be an even bigger year for Andy as his first single was (Where Do I Begin)  Love Story written by Carl Sigman (died in 2000). The film Love Story with Ryan O’Neal was out and the instrumental version was played in the film. On the strength of the film a single was needed, but no words had ever been written as it was only to be an instrumental for the film. Carl wrote the words, Andy sang them and one of the finest ever records was produced.

Two very small hits followed that year called A Song For You and Love Is All. It was also the year that Andy was in Monsato Presents Macini on TV where he sang his 1963 hit Moon River.

1972 saw the U.S give him chart action, the biggest being Speak Softly My Love Theme From The Godfather with words by Larry Kusik. Andy also appeared in The Life And Times Of Judge Roy Bean.

1973 saw a No. 3 UK hit with Solitaire a Gold seller in the UK. The album was also called Solitaire and the single was written by Phil Cody and Neil Sedaka. Neil had the first recording of the song in 1972, but the Carpenters are probably best remembered for this song. The song is about a man who lost love because he did not fight or take it seriously enough.

1974 had only one top twenty hit for Andy in the U.S. charts with Loves Theme, and 1975 gave him Cry Softly and Sad Eyes. No big hits in the UK at all for that time. In fact that was the single story of Andy’s 1970s. He would return to the charts in 1999 and 2002, but Andy left the in the 1970s performing to huge audiences on the cabaret circuits. He was still performing at his own venue called the Moon River Theatre in 2012, which he purchased in 1991.

Andy died in September 2012 aged 84. If you ask most people they would say he was the Moon River man. The truth is that Andy was performing live at a TV award show in 1969 and sang the Moon River song and his record company released the very next day an album called Moon River. Now that was marketing at the very best.

John Grant now writes for many 1970 nostalgia sites and is very happy doing so.