When smartphones were unveiled several years ago, it seemed at the time to spell the end for simpler, low-tech cell phones that had long ruled the day. The common line of thinking was that, with smartphones offering so many high-tech capabilities and long-term potential, they would be so widely adopted by the masses that low-tech alternatives would quickly go the way of the dodo bird.

Today, we know that’s not the case. The market for feature phones has been buoyed by families and individuals who choose not to use smartphones for a variety of reasons. Some may prefer the low-tech capabilities and simplicity of feature phones, but in many cases the high costs to purchase smartphones, coupled with the mandatory data plans that go with them, have created an opportunity for lower-cost feature phones to persist into the future. Feature phone app developers are still finding that they have a wide market to produce for.

Feature phones are projected to last well into the future, and the market for applications that function on these devices is expected to double by 2016, while becoming a billion-dollar industry. But the market for these applications is much different than the apps developed for smartphones because of the technological limitations placed on them. The trick for marketers is selling these applications to consumers who have already demonstrated a lack of interest in keeping up with the latest tech trends in the interest of saving money. Fortunately, there are still strategies for success.

Memory is a precious commodity on feature phones, and for an application to be successful, it needs to maintain a low profile. Consumers might be reluctant to choose one app that consumes the bulk of a phone’s memory when they can fit five into the same space.

To make these accommodations, marketers have worked alongside engineers to ensure that applications maintain functionality while stripping down the graphics and software demands of the app. This has proved successful even for apps enjoying profound success on smartphones, such as those for Twitter and Facebook.

Improving data efficiency to save money

Because many feature phone users have very limited data plans, or no data allotment at all, the most successful apps will be ones that consumer little, if any, data. But marketers do have growing flexibility in this department because more and more feature phones are being outfitted with Wi-Fi capability, meaning feature phones getting a wireless Internet signal can use unlimited amounts of data free of charge.

Pre-installing apps to encourage consumer use

It’s no surprise that many feature phone users are relatively uninterested in using apps to turn their phone into a multi-functional device. If that were a high priority, there would be far more smartphone users and the market for feature phones would shrink considerably.

But that doesn’t mean feature phone users have no interest in apps — only that it may take more work to sell them on the use of these tools. One strategy marketers are using is to have apps pre-installed on feature phones. Even if the apps ultimately require a one-time purchase or a paid subscription, users have the option of te 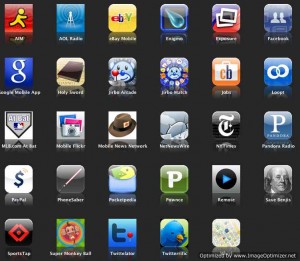 Feature phones will always be limited in what they can do, but within those restrictions there are plenty of opportunities for app developers to cash in. As is the case with smartphones, marketing can go a long way in determining the long-term popularity and success of any one app. But given the constraints of feature phones, collaboration between marketers and developers is even more crucial to producing a high-quality product that will be well received by its target consumers.