The old saying, “like a moth to flame,” is used to express an attraction between certain insects and light. In some cases, after reaching the epicenter of the light, insects are in for a shocking surprise. Taking advantage of this fatal attraction, with the intention of ridding the area of pests, is the electrical discharge insect control system, also known as the bug zapper. This examination will determine whether bug zappers are effective at killing the peskiest of insect populations.

The bug zapper process is relatively straightforward. In short, flying insects are attracted by a UV light source to a grid of electrical wires. Once they reach the grid, and connect two wires with their bodies, a high voltage current is sent through the newly completed circuit. The high voltage current, as one might predict, fries the bug. The word, “zapper” comes from the sound the electrical current makes when the insect hits the grid.

Bug zappers are undeniably effective at killing bugs. In fact, some commercial bug zappers claim to kill more than 10,000 bugs in one single evening. While this is an impressive number, it begs the question of whether or not the right bugs are being killed. Certainly, gnats and mosquitoes are the bane of every family barbecue, but not all bugs can be lumped into this group of tiny terrorists. 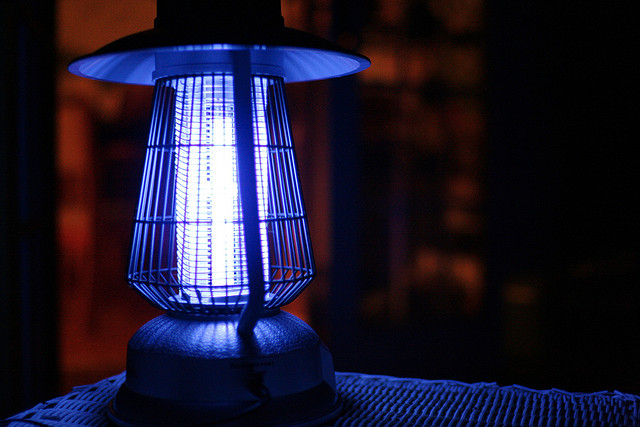 According to a University of Delaware at Newark study conducted by Timothy Frick and Douglas Tallamy, bug zappers are killing too many of the wrong bugs. In this study, Frick and Tallamy examined over 13,000 insects zapped by electric traps and found only thirty-one total that were “biting” bugs, or bugs “seeking blood meals at the expense of homeowners.” For math fans, that is approximately one fourth of one percent of the total. The rest of the zapped insects were either meals for local wildlife (e.g. frogs, birds, fish, bats) or predator bugs that actually attack pests (e.g. wasps and ladybugs). On the contrary, mosquitoes are attracted to the carbon dioxide expelled during human breath, and much less to the ultraviolet light of the traps.

Any entomologist will tell you that insects are the backbone of any ecosystem. With so much collateral damage, it’s difficult to argue that bug zappers are a smart investment for either consumers or the environment. In Frick and Tallamy’s study, they extrapolated insect destruction rates based on average sales and use of zappers across the country and arrived at 71 billion non-target insects killed in the United States every year. Some experts even posit that zappers are actually making mosquitoes a larger problem, as they eliminate their natural predators.

Unfortunately, there isn’t a perfect alternative for ridding yourself of biting bugs. Like zappers, pesticides often have far flung consequences, while other less invasive solutions aren’t typically as effective. Frick and Tallamy suggest using standard bug sprays, campfire smoke, Citronella, or simply avoiding places where there are numerous mosquitoes. While effective at killing all bugs, bug zappers kill without precision and are not at all effective at targeting specific bug populations.

Ronald Love is a freelance writer based in Atlanta, Georgia. Ronald suggests that those who’d like to learn more about pest control visit bainpestcontrol.com for great and helpful information.