There is plenty of debate about whether university fees are putting students off deciding to continue with higher education. However whilst application numbers may be down the situation is not quite as black and white as it may appear and the fee system does not apply across the United Kingdom. Students in Scotland who decide to study in Scotland are not required to pay fees, the Welsh assembly and Northern Ireland have both agreed at cap at £3465 for students wishing to study at university. 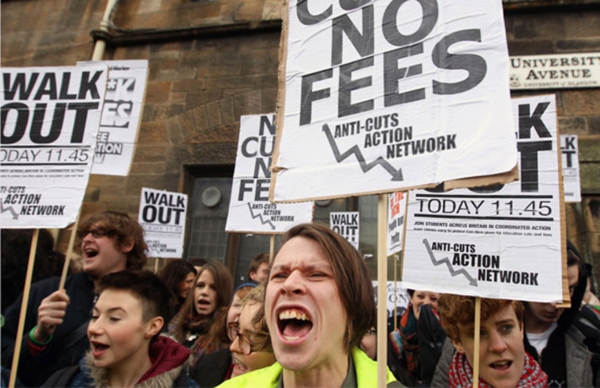 Are fees putting students off?
It appears from recent reports that whatever economic background you come from students have thought twice about applying to universities with the new fee structure in place. This may be seen as a disadvantage by colleges who may miss out on potentially talented students who decide financially they will give uni a skip.

If you decide to pick a course like Medicine, Architecture or similar disciplines the new fee system could be financially crippling for many students. Spending six or seven years studying to become a doctor or vet will mean these students enter the working world with an enormous debt. In the long term it will make it very hard for these students to pay off their loans quickly and will be unable to get on the property ladder until they are in their mid-thirties.

Other students recognise that apart from the tuition fees there are additional costs associated with attending university, especially for students living away from home, it is all of these extra costs which are putting some off applying. The thought of building up large debts is deterring some from further study, especially if they feel that after three years they won’t get a good result.

Benefits of fee system
Introducing a fee system has meant that students are forced to think seriously about whether further study is the right path for them. In the past there is no doubt that some students applied because it was expected of them rather than being driven by a desire to study. These students would often run up large overdrafts and drop out at the end of the first year when they failed to pass their exams. So perhaps this new system will act as a natural filter for those who would be better off seeking employment or apprenticeships as the next stage of their lives.

The fee system also places a value on the quality of education which we’ve been receiving for years for little of no cost. There is no doubt that the standard of our degrees is respected worldwide and now we are recognising that this standard of education has a cost attached to it. Will this result in greater respect for the lecturers, the end of students skiving off lectures…unlikely!

Students who were never destined for further study can now get a head start entering the employment world quicker, without huge overdrafts and start their careers hopefully debt free. They will be able to progress via in house training or perhaps speak to their employers about external training while they work. Increasingly now Accountancy firms and other professional bodies are proactively recruiting A and AS level students and offering them the chance to study on the job. In return the employer gets a focused and dedicated team member.