Posted in Health
Author: Editor  Published Date: November 2, 2012  Leave a Comment on Brush Up: How Your Oral Health Can Affect Your Overall Health

Many people ignore their oral health by taking an out of sight, out of mind approach to dealing with their teeth and gums. An oral infection can spread throughout your entire mouth, but since you don’t see or feel an infection, it becomes easy to ignore. However, if an infection the size of what routinely develops in people’s mouths appeared on their leg, arm, or foot, they’d immediately rush to hospital to seek immediate medical attention.

While it’s easy to assume that the worst consequences of poor oral health would be a few lost teeth or some uncomfortable moments in the dentist’s chair, a number of studies have linked problems with oral health to a number of serious illnesses, including osteoporosis, premature birth, heart disease, diabetes, stroke, and possibly Alzheimer’s. Even though researchers have yet to establish a clear cause and effect link between oral health and several of these diseases, growing evidence does seem to suggest that preserving oral health plays an important role with a person’s overall health. 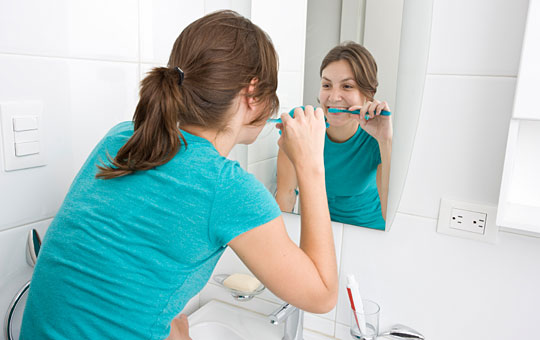 The Spread of Gum Disease
Unhealthy bacteria that festers in your mouth between teeth and gums can cause an infection known as periodontal disease. According to researchers at the University of Buffalo, just brushing your teeth can cause some of the bacteria to enter into your bloodstream. Once there, researchers believe that the bacteria can travel to other organs in the body where they start to create new infections.

Another aspect of poor oral health is inflammation. When your gums become red or swollen, it’s a signal to your body that it needs to fight off the bacteria that causes inflammation to occur. When inflammation occurs in the mouth, your body produces certain chemicals that, like the bacteria the causes periodontal disease, can spread through the bloodstream and cause further health complications in other parts of the body.

As researchers continue to exam the subject, it becomes progressively clearer that a mouth-body connection exists that links oral health problems to other ailments in the body.

Diabetes and Oral Health
While oral health problems don’t directly cause diabetes, they do have an interconnected relationship. According to a recent survey, approximately one-third of all diabetics don’t realize they suffer from the condition. However, a number of oral health problems can indicate diabetes in a patient who may not otherwise realize they suffer from the condition.

Patients who show up at the dentist’s office with several oral abscesses, for example, will most likely be referred for a glucose tolerance exam, as such a condition is a prime indication of diabetes.

Gum disease and diabetes also interact in a vicious circle. Any time the body begins to fight off an infection, such as gum disease, it begins to produce the protein cytokines, which increases the body’s resistance to insulin and makes it more difficult for a patient to control their blood sugar levels. Conversely, patients who have a difficult time controlling their diabetes have an impaired immune system, which makes it more difficult for them to control their gum disease.

Heart Disease and Oral Health
According to studies conducted by the American Academy of Periodontology, individuals who suffer from periodontal disease have double the chance of also suffering from coronary artery disease. While a number of theories abound about the connection between the two conditions, one theory states that inflammation in the mouth leads to increased plaque buildup in the heart.

However, back in April of 2012, a top panel of cardiologists and dentists released a report which stated that no evidence has yet been uncovered that conclusively links a cause and effect between the two diseases. When discussing their findings, the panel did state that the two diseases seemed more likely linked due to common risk factors rather than a direct link of one disease causing the other.

While researchers continue to search for direct evidence that links the two diseases, patients who suffer from either condition have a high enough risk factor for the other they need to be tested.

Premature Birth and Oral Health
Ob-gyns have long understood that pregnant women are at a higher risk of preterm or low-birth-weight births if they suffered from an infection.  While doctors routinely stay vigilant for any signs of a urinary tract or throat infection, it didn’t occur to many doctors that an oral infection could lead to a premature birth until periodontic researchers began to exam the subject.

Studies have since shown that expecting mothers who suffer from extreme cases of periodontal disease have an increased risk of premature birth. Cytokines, the protein discussed earlier, also cause women’s bodies to produce more prostaglandin, a hormone that helps to trigger birth. Fortunately, studies have also shown that women who receive early treatment for gum disease can lower their risk of premature birth.

Timothy Lemke writes about why your oral health matters for Dr. Timothy Harbolt, a Salem Oregon dentist at Smiles Dental.