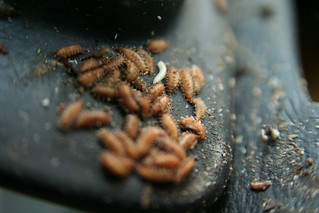 Most people wrinkle their nose at simply the thought of maggots. Maggots, the larvae of flies, earn their reputation through feeding on rotting fruit and flesh. Ironically, this same behavior is what makes them useful in a crime lab.

Mexican police recently took advantage of the unappealing appetites of maggots to identify the body of a burn victim. The body was burned too badly to be visually identifiable and forensic investigators could not recover an undamaged DNA sample.

After thoroughly searching the tissues of the victim for the necessary DNA without success investigators turned to the maggots that had been feeding on the body. Scientists at the University of Nuevo León were able to extract useful human DNA samples from the digestive systems of three maggots found inside the victim.

Previously collected circumstantial evidence had not been enough to identify the victim. The human DNA collected from the maggots’ gastrointestinal tracts allowed investigators to put the pieces of the puzzle together to form a solid identification.

Dr. Martin Hall, an entomologist with the Natural History Museum in London, says that while there has been much research done on human DNA extraction from insects it is rare to see it used in the courts. He has been used as a consultant for the UK Police Forces and has interpreted insect evidence in over 120 cases. Dr. Hall hopes that police and pathologists will soon recognize the usefulness of insects on crime scenes, as they are all too often ignored as evidence.

Dr. Jeffrey Wells, an entomologist with Florida International University in Miami, is involved in multiple research projects concerning forensic entomology. In his opinion, while the extent of damage incurred by the body in Mexico is rare, there are ways in which the DNA extraction process from maggots would be useful for other cases.

As an example, imagine a maggot is found in a car. Extracted human DNA from the maggot’s digestive system would be proof that the vehicle was used to transport a dead body and could be matched to a particular victim.

The case in Mexico is not the first time that human DNA extracted from a maggot gut has been used in forensics. In a Chinese court last year, a headless body and its head were found near each other. Maggots found on both the head and the body were dissected, their guts analyzed, and the human DNA inside each compared as proof that the head indeed belonged to the body.

What is unique in the Mexican case is the way that the DNA was analyzed to successfully match the burn victim to the abducted woman. Hopefully, despite the wrinkled noses upon the discovery of maggots churning inside a body, police will begin to utilize them more often to benefit forensic investigations.

Derek is an active blogger. The following article is for dna diagnostics.