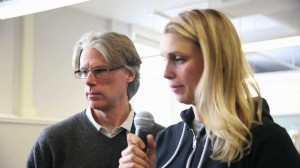 If up until now you believed that sex toys are strictly reserved for the fun times in the bedroom, off-collar jokes, and other slightly taboo matters, usually filled with innuendo, think again. There has been a growing amount of evidence lately, which goes to show that they can also serve as objects of science, in a series of completely serious and legitimate scientific experiments.

Sarah Ruhl’s In the Next Room

Australian playwright Sarah Ruhl came out with a daring play in 2009, titled In the Next Room, but also referred to as The Vibrator Play. Ruhl’s text explores numerous themes  concerning the history of vibrators—specifically how they tied in with Victorian attitudes toward female sexuality. In that era, during which being prim, proper, and modest were all considered the only ways a woman could behave in public, women used to be treated against hysteria, in licensed medical facilities and by actual professional doctors, with the aid of vibrators. The play also looks at motherhood, the practice of nursing, and the hidden sexual stratum  of jealousy, which also come into play when it comes to womanhood, and attempts to expose the ignorance of doctors less than one hundred and fifty years ago.

The picture the machine reveals is one of improved voice energy, even after the vibrating device has been removed. The subjects’ vocal frequencies are far greater after the therapeutic massage and, according to Ley’s own statements, his method has never failed thus far. Obviously, his patients are nothing short of impressed to see the results of his work.

Ley’s method started from the assumption that applying a vibration to the throat that was close in range to that of the human voice (i.e., somewhere around 100 to 120 hertz) would yield beneficial effects. Not only was he correct, he also inadvertently rediscovered a principle that speech pathologists have been employing for years now in their practice. Speech therapists sometimes massage their patients’ larynx with their fingers – yet this method has its drawbacks, since the gag reflex makes it uncomfortable for some people to withstand it.

The voice coach came up with the idea of using vibrators out of sheer luck. He took a trip to the local sex toy shop and first experimented on an actor. The results were incredible from the get-go: when asked to hum, the actor in question seemed to have been completely liberated from all the tension pent up in the muscles of his larynx, while the vibrations produced by his vocal folds had substantially amplified.

While carrying his experiments onward, Ley also discovered that vibrator massages to the cheeks and to the top of one’s head can help improve highly specific overtones in one’s voice. Some of his clients are highly enthusiastic about the method and explain it has helped them pull of previously unimaginable performances. Others speak of the relaxing powers these massages can hold, even for people who don’t specifically wish to improve their vocal range, but simply to release some tension in their throat muscles. Ley has been invited to speak at a symposium of the Voice Foundation in Philadelphia in June and is also trying to patent a device specifically conceived for throat massages.