If you have ever seen the short film Powers of Ten on YouTube which zooms in and out of a normal sized image in scales of ten (at least one upload of which has racked up millions of views) then you will be familiar with the work of Charles Eames, though you may not have registered his name. Yet as eye-opening and educational as that short film is, it is not film-making for which Charles Eames is best known.

It is almost certain that you have seen other examples of his work and still remain unaware of the name, yet he was a pillar of design for living. He gave his name to iconic architecture and furniture – the Eames house, the Eames sofa, the Eames lounge chair (you will know the Eames lounge chair), the Eames office chair and many other acronym heavy works such as the Eames LCM, LCW, DSW and DCW. He worked in close collaboration with his second wife Ray, who he married in 1941, who herself was already an artist, designer and architect. Although the furniture Eames designed is almost always listed with his name alone, there is no doubt that she was hugely influential upon him and their usual work mode was collaborative. 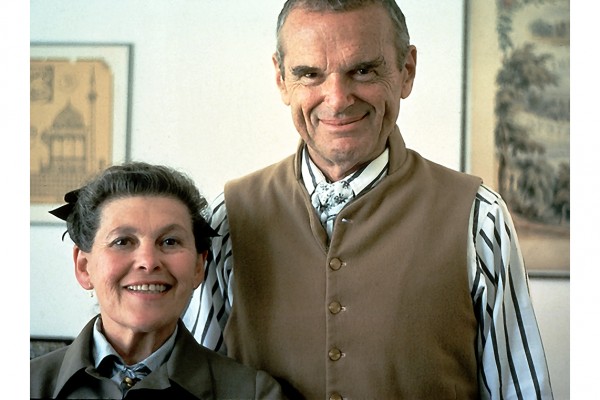 They always attempted to be didactic in their work as Powers of Ten clearly demonstrates, and they set up several exhibitions of which the most successful is certainly Mathematica: a world of numbers… and beyond, which was set up in 1961 at the behest of the California Museum of Science and Industry and funded by IBM. It should tell you a great deal that this exhibition ran continuously until 1998, a record for any sponsored museum exhibition, and it isn’t over yet: the exhibition is still ongoing in the New York Hall of Science some 51 years after its inception. The work was so admired that it was duplicated more than once, but the original is considered a classic of science exposition. The Eames’ also designed the vast IBM exhibition for the 1964 World’s Fair – it covered over an acre of ground and featured 45 man-made trees fashioned from steel.

The Eames’ remained a force majeure in artistic design for several decades – the Powers of Ten film was released in its final much-modified form in 1997 and immediately chosen to be stored in the Library of Congress, selections for which are made on the basis of being “culturally, historically, or aesthetically significant”. Charles and Ray Eames certainly fall into all those camps.

Florence Green writes articles in her spare time for clients such as www.eamesdsw.com.