Posted in Lifestyle
Author: Editor  Published Date: September 3, 2012  Leave a Comment on City Bicyclists And Cars, Looking At The Issue From Both Sides

Cities are notorious for having heavy traffic, and this isn’t always cars. Nowadays, there is an increasing amount of traffic made up of vehicles other than cars due to higher gas prices and the nation’s overall desire to save money anywhere they can. With the operation of any vehicle comes a great responsibility, not just to one’s self but to the other drivers they share the road with. Here are some important facts to consider, whichever side you are on, to help keep you and those around you as safe as possible. 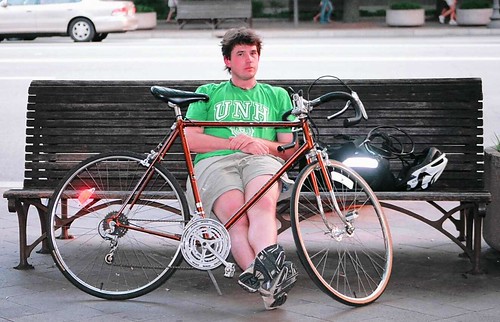 Everyone would probably be a lot happier if the bike lane were located inside the parked cars, next to the curb rather than next to moving traffic. The truth is that having the bike lane on the street provides bikes with their own area to ride in with the flow of traffic so they can obey laws and stops like all the other drivers.

A few things happen though which can throw off the effectiveness of this bike lane; one is that cyclist in the city disregard the lane, using it at their convenience and not staying within its parameters at all times. The second is that motorists do not always respect the parameters either, thus rendering it ineffective. If both sides treat the bike lanes like nothing more than extra paint on the ground, then they cease to be able to function in its sole purpose which is to protect cyclist from injury and motorists from liability.

Both cyclists and motorists alike need to open their eyes and focus on the road and what is around them when they are traveling from point A to point B. A lot of time drivers of both vehicles get a sort of tunnel vision, where they are distracted by their phone calls or texts or the music on their iPod, this sort of distraction is deadly, a fact we should all be fully aware of by now. When you are on a bicycle, you have just as much responsibility as if you are driving a car. Both have the potential to cause serious accidents and both need to be handled with the up most care and caution and focus.

Just because you need to get somewhere quickly does not mean that you are allowed to drive, or cycle, like you are the only person on the road. In the city, it is especially necessary to always operate your vehicle with the highest level of consideration for the others on the road. Cyclists need to stay within their given bike lanes and respect the traffic and other drivers, staying aware of their surroundings, from parked cars to the semi trucks making wide turns. Motorists at the same time need to consider a cyclist speed and keep their eyes open for fast approaching vehicles and time their maneuvers accordingly. Drivers in cars also need to not cross over into bike lanes and both sides need to respect the area they are given in which to operate.

The only way that both motorists and cyclists can coexist in the city is if each respectively obeys all traffic laws. If both sides can be held accountable and are trusted to operate in the manner required by law, then there needn’t be a problem; however, both sides are guilty for feeling from time to time like certain laws are unnecessary or they can break the rules just this once. Such is not the case, and this type of behavior is very dangerous for both sides. All it takes is one rolling stop or one cut through a traffic light to change your life forever.

Follow the rules every time, you could seriously regret it if you don’t.

Following proper signaling and safety procedures is extremely important for both the drivers of motor vehicles and cyclists alike. Failure to signal your next intended move or stop when required to could be that moments difference in a potential accident. If you are biking along and you fail to signal your turn and a care continues going straight behind you, you crash and could die; its that simple. The same goes for driving a car in the city. If a biker is behind you and you fail to signal, they could strike your vehicle. This is only one small example of the endless scenarios in which a failure to follow safety precautions can result in some negative outcomes.

It is also extremely important for both sides to always remember to use andy seatbelts or helmets required when riding. These items are required by law, and in the event that something unexpected does happen, they will hopefully protect you from serious injury.

Hilary Rose is a bicylist and city riding enthusiast. She works for Racor Storage Solutions to help people find storage solutions for their bikes.