Posted in Cars
Author: Editor  Published Date: July 22, 2012  Leave a Comment on Consumers Starting To Realize All Benefits Of The Chevy Volt

Consumers Starting To Realize All Benefits Of The Chevy Volt

The buzz and spin surrounding the Chevrolet Volt was intense long before it ever rolled onto the showroom floors in 2011. It was a build-up that few vehicles in automotive history have been expected to live up to. Not surprising then, was the fact that the Volt had a high hurdle to clear from Day One. The industry—not to mention local dealerships—held their breath to see whether the general public would go thumbs up or down. 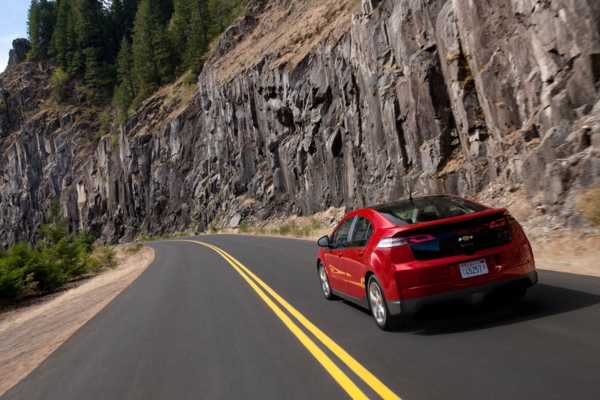 As to be expected in an uncertain economy, consumers were cautious. The Volt’s innovative technology deserved both a second look—and some careful comparison to other traditional hybrid alternatives. The plug-in hybrid system in the Volt offers a drive train that incorporates one 149 horsepower electric motor driven by a battery pack charged by a 74 horsepower gasoline generator. Unlike other hybrids that run off the gasoline engine when the battery charge declines, the Volt is driven by its single electrical motor at all times. For the first 30 to 50 miles of operation, the Volt runs entirely on electricity with no gasoline component. As the battery level declines after that point, the gasoline generator kicks in to replenish the battery voltage. This results in a cumulative EPA mileage equivalent to 98 miles per gallon on all-electric operation and 37 miles per gallon while running the generator.

Drivers in states like Texas, with widely separated destinations and long stretches of highway, are warming to the Volt’s extended range—with a fully-charged battery and a full tank of gas, the car can average 380 miles of total range. And since, for shorter in-town trips up to 50 miles, no gasoline at all is required, the benefits of plug-in hybrid technology’s short range/long range versatility are becoming clear to the consumers in the Lone Star state.

Initial response to the Volt was cautious, due in part to the upfront cost. However, high gasoline prices throughout 2011 have dramatically changed the sales outlook in 2012. General Motors sold nearly 2,300 volts in March 2012 and almost 1,700 in May. To put the new sales in more vivid perspective, consider this: So far in 2012, the spunky Volt has outsold Chevrolet’s iconic Corvette—as well as it’s hunky Avalanche pickup!

Consumer acceptance in California has left some dealers unable to meet the demand and waiting lists are lengthening. Meanwhile, at outlets like Chevy in Mission, TX, Volt fans can still walk in and check out a new model on the showroom floor. However, given increasing demand, who knows how long they’ll be a demo available? The Chevy Volt had a lot to live up to. Now, it’s starting to do a lot of catching up

Jesse Dugan is a professional writer and blogger that contributes to several automotive blogs. Follow him @JesseDugan.