While dragon boat racing is an enduring symbol of oriental culture, it has truly become a worldwide phenomenon. Christopher Patton was the last British Governor of Hong Kong. He donated a teak dragon boat to Brian Mulroney in 1992 to cement the political and economic ties between Hong Kong and Canada. Fans of the sport can still see it at the Canadian Museum of Civilization in Hull, Quebec. Interestingly enough, Hong Kong received a totem pole from British Columbia in the exchange.

Many people still remember Expo 86 as the world exposition of different modes of transportation. Six dragon boats were donated to the city of Vancouver for use during that celebration. A group of individuals calling themselves the Chinese Cultural Centre Dragon Boat Association got together and organized the first real dragon boat races in Canada shortly after. Vancouver turned 100 that year, so the races were added to a variety of other events celebrating the centennial. 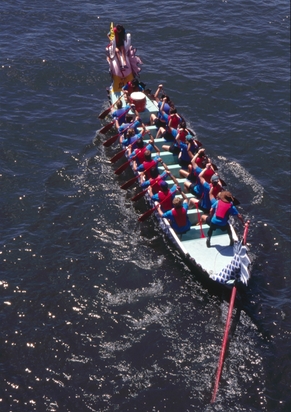 Some fans might want to see a dragon boat race in person. Countless people have already turned out for the Tim Hortons Ottawa Dragon Boat Festival. Hong Kong Canada Business Association staff helped start up this annual regatta back in 1993. Personnel from the Ottawa Dragon Boat Foundation even use the event to raise money for local charities.

Some Chinese cultural societies set up their own events. They might be dedicated to the preservation of other traditional Chinese arts as well. Kung fu, lion dancing, musical performances and dragon boat racing can be spliced together to make an interesting menu of events for spectators. A few people might even want to get involved in the action.

Event tourism has become important for dragon boat organizations outside of Canada as well. Back in its Chinese homeland, the sport attracts droves of fans who come from around the world to get a chance to see racers in action. Many people blow their money by gambling it away at these events, which is often illegal anyways. However, there are those who simply want to experience the sport first hand.

Dragon boat racing transcends politics and organized events. There are numerous other benefits that come with the sport. Some people discovered that it offers an interesting alternative to western rowing sports. While crew event can be extremely competitive, there are groups of dragon boat enthusiasts who simply enjoy the feeling of being in water. Other people train for races for a far different reason.

Several scientific studies have focused around breast cancer survivors who enjoy dragon boat racing. While no one should start a training problem without speaking to a physician, some women have found that the act of rowing helps to keep in shape after recovering from a serious medical diagnosis. It provides an excellent way to exercise the arms and build up muscle mass in them. This means that the sport might have a future as a form of therapy. Even if it doesn’t, there’s no way to deny the fact that dragon boat racing is a fun way to pass the time.

Kenrick Wilkerson is a sports fanatic. He has played many sport as recreational hobbies but loves Dragon Boat racing. He recommends checking out GWN Dragon Boat 577 Wellington Street West, Toronto, ON M5V 1G3, Canada +1 416-962-8899. Visit their website to keep up to date on Ottawa Dragon Boat festivals.