Posted in Education
Author: Editor  Published Date: October 6, 2012  Leave a Comment on Excessive Working Hours- How Does Australia Stack Up

It’s no secret the people are working harder and harder. Two-income families have become the status quo. Many Australian parents are reporting that their jobs greatly influence their family lives, taking away from that all-important quality time. But how do we measure up with other countries? Are we working harder? Is it time to cut loose and move to Sweden? Let’s take a look at the facts.

In Denmark and Sweden, the average work week is thirty-one hours. In Germany, Norway and the Netherlands, it is more like twenty-seven. It’s no wonder these countries are also ranked some of the happiest in the world.

In France, a mandatory 35-hour work work was put in place over 10 years ago, and functioned more or less adequately for eight years until it was axed when a new conservative government came into power. The average workweek for full-time employees is now about forty-one hours. 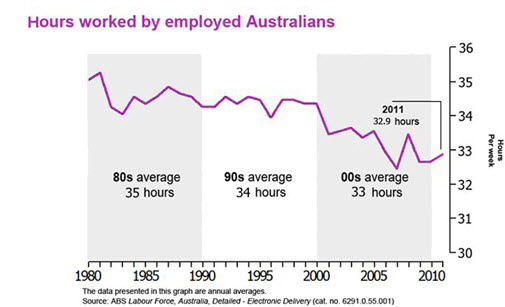 In America, most full-time employees are looking longingly across the border, hoping for the return of the forty hour work week. One in four professionals works more than fifty hours a week. Taking account inflation, Americans work an average of eleven hours more per week than they did thirty years ago, for an average of $8000 less. The average number of hours per week is forty-six.

Is it worth it for a bit of extra productivity? One six-year British study showed people who worked eleven hour days were twice and likely to suffer depression that people who worked seven or eight hour days. Other studies show Americans are some of the most stressed-out people in the world, that at least one million of them call in sick every day.

Is doesn’t end there. After eight hours of work, studies show productivity is decreased by half. Workplace stress results in over $200 billion in lost productivity. That’s not even mentioning personal damage to overworked employees.

JasonFried and DavidHeinemeierHansson, authors of Rework, suggest employees should never work past five o’clock. They say their employees are not only more productive but also more creative when they have thriving private lives and ample time to pursue hobbies outside of work. That’s something employers often forget when they’re hammering their employees with extra work. A happy employee is infinitely more valuable than an unhappy, overworked one.

Sustainable Design Consultant: Green is the new gold. With the carbon tax looming, Australian businesses are clamouring not only to look green, but also to evolve their businesses by reducing carbon emissions and energy consumption and improve their overall environmental impact.  Sustainable Design Consultants also advise on sustainability as a component of risk management, assessing potential climate change-related liability. Communication skills are hugely important in this role, as is keeping up to date with new technologies, legal and political developments and finding creative ways to work around what are often rigid corporate structures.

More and more of our lives (and business deals) are being conducting online. All the signs are saying the future is digital. You don’t have to be IT professional, but it wouldn’t hurt for us all to bone up on our computer skills. A bit of design, programming or HTML capabilities can go a long way. For anyone that works behind a desk even a portion of the time, social networking and top-notch communication are the new standard. Creativity rules. The employees of the future are well rounded, continuously educating themselves, fine-tuning their presentational skills online and in person, and keeping current at all costs.

So how is Australia stacking up against other countries? In 2011, the average hours worked was thirty-three per week. It’s no wonder that our country was ranked the eighth happiest nation in the world by the UN. As you can see from the graph, the number of hours we’re putting in a week has actually decreased in the last thirty years. Perhaps that explains why people are so eager to get in.

Looking for a happier job? Try InsideTrak, for all the latest engineering jobs and much more.