Football stadiums are not only the place where you can watch and support your favorite team or even attend some spectacular concert or other kind of performances. They are complex architectural projects, and some of them are quite breathtaking. There are different stages in developing this kind of an architectural project, such as safety, capacity, and functionality, exterior, interior and other. Today, these enormous constructions are prone to be moderated, renewed and in some cases even rebuilt. Architects are there to give creative ideas and to consult with the experts in architectural marketing in order to successfully realize the project and the authentic look of each of these stadiums. In the world where football is more than a sport, there are many stadiums, but some of them became not just a football field but also a significant architectural construction.

Camp Nou in Catalonian, or New Field in English, is the home of famous Spanish football club – Barcelona. With the capacity of 99.786 seats it is the largest stadium in Europe. Camp Nou was first open in 1957, and besides housing FC Barcelona it is also the home of the Catalonian national football team. The construction of Camp Nou is consisted of three rings. The third ring was constructed before the World Cup in 1982 and the capacity of the stadium was enlarged and it could hold 115.000 spectators. The highest point of the third ring is 48 meters from the ground level. In 1994 the stadium was modified again, this time by converting the standing places in the upper stands into seats and enlarging the first ring. Because of that the football pitch had to be reduced 2.5 meters. It is considered to be one of the most atmospheric stadiums not only in Europe, but also in the whole world. Because it is a magnificent architectural construction, Camp Nou is a must-see tourist attraction. 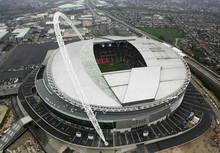 One of the most expensive stadiums in the world is the home of England national football team. This magnificent construction has a 90.000 seating capacity which makes it the second largest stadium in Europe. Wembley Stadium was firstly built in 1923, but in 2003 it was demolished and completely rebuilt.  The new stadium was open in 2007 and it was the centerpiece for the 2012 Olympic Games. The new look of Wembley is both functional and architecturally significant. The roof of the Wembley Stadium is unique, creative and functional because of the sliding roof that provides high quality grass pitch by adjusting the moving of the roof and necessary daylight.  The arch of the Wembley Stadium is very functional, apart from being a cosmetic feature, because it supports both the north and south roof. In order to build this construction, 4.000 separate piles were used to form the foundation and the deepest of these piles was sunk to 35 meters. Wembley Stadium can be converted into an athletics venue when necessary, thanks to removable steel and concrete platform which can rise up to 6 meters above the football pitch. Wembley Stadium is hosting not only football and athletics, but it is also a venue where concerts are performed. Recently it has become the point of tourist interest. It is the five stars UEFA stadium.

Allianz Arena is the home of two football teams, Bayern Munich and TSV 1800 Munich. It construction started in 2002 and it was officially opened in 2005. Allianz Arena has the capacity of 66.000 seats. The Allianz Arena’s most distinctive feature is certainly the exterior of this stadium with the light changing system made of 2.874 ETFE foil panels. Each panel can be lit separately and depending on the game played, Allianz Arena can be: red when Bayern Munich plays, blue when Munich 1800 is the host and white when the German national team plays the game.  The roof of Allianz Arena has built-in roller blinds which can be drawn forwards or backwards, in order to provide the right protection from the sun.

There are many more stadiums in Europe, as well as in the rest of the world, which are unique and authentic, but also very functional.  They became the landmark of their hometowns and architectural construction that intrigues tourists to come and to admire. However,   creating new projects in such an environment, with all the landmarks all around the world, can be quite difficult simply because the project cannot be in the spotlight. This is why architectural marketing exists, to inform everyone of the ongoing projects that will, perhaps, be even greater.