Another exciting theater season is upon us, and though the productions may be familiar, the ever-changing casts provide unique experiences for performers and audiences alike.

Few things in pop culture have had more staying power than Saturday Night Live. At 38 seasons and counting, scoring a ticket to see the wigs, impersonations, and witty topical commentary in person can be tougher than manufacturing a successful post-SNL film career. Essentially a theater production in itself, it seems only appropriate that many Saturday Night Live stars have gone on to find more success on Broadway than on the big or small screen, aside from the obvious exceptions of course.

In case you weren’t one of the lucky few to see the likes of Ana Gasteyer, Molly Shannon, Chris Rock, Colin Quinn, or Darrell Hammond live from Studio 8H, rest assured that the opportunity may still present itself down the road, as evidenced by the growing number of alumni opting to hit Broadway. Instead of fading away into obscurity, here’s a list of those who successfully returned to their SNL-esque roots. 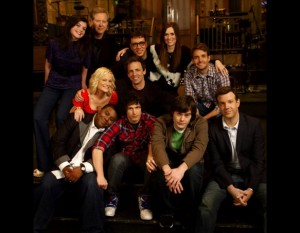 Ana Gasteyer: The Threepenny Opera, Wicked, The Royal Family
When her six-year tenure on SNL came to an end, Ana Gasteyer made it clear the theater was where she needed to be. In between small parts in films like Mean Girls, Gasteyer co-starred in The Threepenny Opera on Broadway, before winning the coveted role of Elphaba in Wicked, which she originated for the Chicago production and eventually reprised on Broadway. A string of musical roles followed (Writing Arthur, Passion), followed by a return to Broadway in The Royal Family and later in Girl Crazy.

Molly Shannon: Promises, Promises
Like Gasteyer, Molly Shannon also departed SNL after her sixth season, though her path to theater took a bit longer. Shannon’s Broadway debut came nine years after her final episode, as she took over the role of Marge McDougall in the musical comedy, Promises, Promises, which also starred theater vets, Sean Hayes and Kristin Chenoweth.

Chris Rock: The Mother****** With the Hat
In true Chris Rock fashion, his first Broadway play was titled something he couldn’t even fully say in interviews. Unfortunately, that proved to be a major issue with theatergoers who ultimately passed on checking out The Mother****** With the Hat. Despite the disappointing box office numbers, the production earned significant recognition in the awards department, most notably six Tony nominations, including one for Best Play, while Rock received a Drama League Award nomination for Distinguished Performance.

Colin Quinn: Long Story Short
Even before his SNL days were done, Colin Quinn was trying out his act on Broadway. His debut was the one-man show, Colin Quinn: An Irish Wake, and proved to be a precursor to the years later follow-up, Long Story Short, which was directed by Jerry Seinfeld. The latter especially, was well-received by both audiences and critics and has helped lead to future projects down the road.

Darrell Hammond: The 25th Annual Putnam County Spelling Bee
Holding the distinction of being the longest tenured SNL cast member ever (1995-2009), Darrell Hammond is more than familiar with the art of the live performance. During a summer hiatus while still with the show, Hammond brought his talents to Broadway, debuting in The 25th Annual Putnam County Spelling Bee for a limited run in the musical as Vice Principal Douglas Panch.

Honorable Mentions: Will Ferrell and Mike Myers
Two of the exceptions mentioned above would have to be Will Ferrell and Mike Myers. Ferrell, at least, has been very visible since leaving SNL, while Myers had a nice run, but has hit some bumps in the road as of late. The latter may soon be bringing back a beloved character as rumors have swirled about a musical edition of Austin Powers, which will potentially serve as a prequel to the successful trilogy. Word is Myers will be involved in the production, but not star in it. Hopefully that’s just a rumor though, because it’s hard to imagine anyone else playing the iconic role.

Ferrell, on the other hand, made his Broadway debut in the one-man show, You’re Welcome America. A Final Night with George W Bush, in which he revisited one of his most memorable SNL impressions. The production was an all-around success and even garnered a Tony nomination for Best Special Theatrical Event. Not long after, with Ferrell’s Broadway stock high, his hit film, Elf, was adapted into a musical, which enjoys nice runs during the holiday season.

You never know which SNL star will turn up in a production next, but in the mean time, browse the Vivid Seats inventory for a great selection of theater tickets in stock now.

By Amy, Copywriter at Vivid Seats