Posted in Traveling
Author: Editor  Published Date: October 4, 2012  Leave a Comment on From The Beach To A Cloud Forest: Panama Vacation Diversity

So you have been thinking about going on an exotic vacation in a tropical region, but do not necessarily want to park yourself on a beach and drink fruity cocktails all day, you want something a little more adventurous and exciting. I’d like to introduce you to a vacation in Panama, where you can not only lay on the beach, but visit a rain forest in the Panama City, the “Galapagos Islands of Panama,” take boat trips down the Panama Canal or in dugout canoes along the Chagres River, or watch over 950 species of exotic birds, many found nowhere else in the world, take an eco-tour, and accomplish all of these things in a short period of time in a nation no larger than South Carolina. 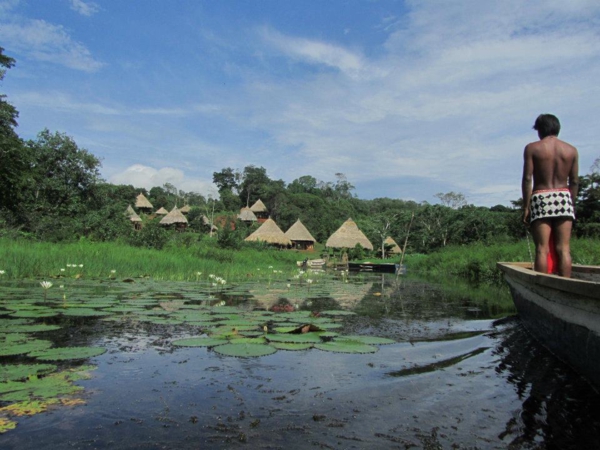 Following are samplings of some of the diverse options that Panama offers to its guests who travel from all over the globe to experience its magnificent breadth of vacation possibilities.

Most people arrive in Panama via Panama City. It is a centrally located starting point that allows for a host of day trip options. One very popular one is only 45 minutes outside the city on the Las Cruces Trail that was built over 400 years ago for Spanish explorers to use when trekking across the narrow nation. But you do not have to travel that distance to find Metropolitan National Park right next to the grand old city. You may ascend to the top of the forest for a 360 degree view over Panama City all the way to the Panama Canal. Or, you can just stay within the city limits and explore and taste the European and Indiana influences everywhere.

Eco-Tours may be the hottest thing in travel these days as people become more conscientious about creation care of the earth, and keeping it preserved for generations to come. An eco-tour is less about amusement parks and more about experiencing nature up close and personal without leaving any harmful human print upon the land. Panama offers so much natural diversity, from the Pirre Cloud Forest, where you can dwell in a canopy overnight in the clouds situated high in the trees, to birding in Dareien National Park, to visiting the Coiba Island, most of which is remains unaffected by humans.

There are a smattering of islands along both the Pacific and Atlantic sides of Panama, but few islands are UNESCO World Heritage Site that Coibal Island is in Coiba National Park. Considered to be Panama’s answer to the Galapogos Islands, this incredibly diverse island with coral reefs that are home unique fish, as well as humpback whales and hammerhead sharks, is unmatched in natural splendor. It was once a Panama penal colony and somehow survived those days with an astounding 80% of the area unspoiled by humans.

The Chagres River must be explored in a dugout canoe like the Indians used to use. The river basin also serves as a reserve for the Panama Canal, but allows for fantastic freshwater fishing, water skiing, and boating. Take a trip through the rain forest on a boat and you might see crocodiles, or kayak in the Caribbean Sea where Christopher Columbus first landed in Panama in Bocas del Toro.

No visit to Panama is complete without a trip to, and down, the Panama Canal. One of the modern engineering marvels of the last 100 years, the Panama Canal is currently doubling its traffic capacity, so now is a good time to see history in the making by watching a third lock being built. Visit the canal visitor’s center and museum, and even take rides from ocean to ocean.

From Darien National Park next to the nation of Columbia, where 450 unique species of bids dwell, to Volcan Baru, home to Panama’s only dormant volcano, to Soberania National Park, located just 16 miles from Panama City, where you can spot Toucans, Crimson-bellied Woodpeckers, Two-toed Sloths, Anteaters, and a variety of monkeys. There are 16 national parks to choose from, each with its own individual attractions.

Casco Viejo, the Old City, lies on the outskirts of modern day Panama City, and provides one of the great walking tours in all of South- and Central America. From its charming old churches and neighborhoods, to its dining, and captivating history, Casco Viejo was conceived to protect from future pirate attacks. The pirate henry Morgan, believing that old Panama Viejo was hoarding gold, destroyed the city and its denizens, but found none, so the story goes. One can now find remnants of those days as preservation and archeology work have restored and uncovered many beautiful sites. You will notice both European, Caribbean, colonial and ancient Indian charm expressed in its architecture and dining throughout this popular area.

With over 960 species of birds that dwell in Panama, and a host of migratory birds that stop along their southerly and northerly routes, Panama offers you world class birding opportunities. The Harpy Eagle is Panama’s national bird. Found in numerous locations throughout Panama’s marshy lowlands all the way to its mountain tops, it typically stands 3’ tall, but has an incredible 7’ wing span. Though nearly extinct in many parts of Central America, Panama has gone out of its way to protect their national bird. Other birds include the Choco Tinamou, the Crested Guan, and the Blue-winged Teal, many types of Macaws, Toucans, the Fiery-billed Aracari, the Yellow-billed Cuckoo, and the Ruby-throated Hummingbird. These are colorful names for a host of colorful birds.

A vacation in Panama may be the tonic you have been searching for. A rich, diverse, experience awaits you.

Revenflo Web Team: A team of SEO writers dedicated to making the internet a better place