Posted in Finance
Author: Editor  Published Date: September 27, 2012  Leave a Comment on Ho Ho Hoping For Cool Christmas Bonuses Such As These

‘Tis the season to be jolly…and look forward to, not only Christmas pudding and presents, but also those much anticipated Christmas bonuses. It’s that time of the year again when we all start thinking about Christmas presents and holidays for which bonuses come in very handy. Then again maybe your bonus this Christmas could easily eclipse even the most elaborate present from Santa.

Mining magnate Clive Palmer showed his staff his appreciation by giving them the most amazing Christmas bonuses ever. All 750 employees were treated to a holiday for two to a five star resort in Fiji. Of the 750, 50 employees also each received a Mercedes Benz, and ultimately everyone was treated to a $2 million Christmas party. Um…wow! This is a hard act to follow by any means. No wonder he’s seen as the Santa of Christmas bonuses. 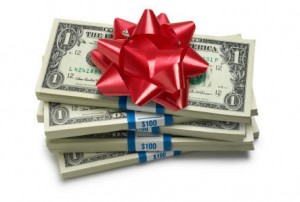 Palmer is known for his generosity, but he gives credit where credit is due and as a wise businessman he has come to realise that without his workforce the money in his bank account would not have grown so substantially. He felt that because they are the backbone of his company he should give back to them as much as they have given to him, and so their Christmas bonuses brought tears to their eyes, and all those who weren’t in on it, like the rest of the world.

Another company made a point of giving its 25 employees Christmas bonuses each year that they could also use and enjoy. One year it was telescopes, the next they gave gifted mountain bikes. The fact that many companies go out of their way to show their employees just how much they appreciate the work, means these companies value their backbone. One company kindly gave their staff members and families a trip to Mexico over the Christmas period, as well as a cash bonus.

Singer Marc Anthony also treats his team for all their hard work in promoting him and ensuring his every whim is met. Anthony’s Christmas bonuses to his staff were an all-expenses trip to the Dominican Republic.

With Christmas just around the corner and inflation on the rise, some people are looking to spend their Christmas bonuses on additional groceries, or a chance to take their family out for a nice meal, many are privileged enough to go on an all-expenses paid holiday. Regardless of the kinds of bonuses, they probably worked extremely hard for them.

Vida Denning is a prolific freelance writer who does not get Christmas bonuses because she works for herself, but she has a long wishlist which includes working in Toronto office space and freelance while enjoying Canada’s white Christmas.