The seawater has a high level of salinity and totally dissolved solids so it is not suitable for human consumption. The salinity level of the water must not surpass 500 ppm TD in order for the water to be suitable for use in human consumption. The world health organization (WHO) set the maximum limit for water salinity to be 1000 ppm TDS. To reduce the salinity of the water, the seawater has to pass through a filtration process called desalination. The seawater naturally contains a lot of salt and desalination will remove most of the salt content. 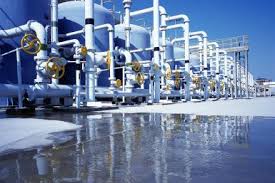 In reverse osmosis desalination process, the suspended solids will first be removed during the pre-treatment. The pre-treatment stage will also attempt to kill some of the bacteria. It will get rid of the contamination that can obstruct the pores in the membrane and prevent the water from passing through.The water has to pass through a membrane that is filled with lots of tiny microscopic pore at high pressure. The pore is much smaller than the salt particles so that only the water molecules can pass through. Many different types of solids that are dissolved in the seawater won’t be able to pass through the membrane.

The desalination companies will use high pressure pumps to move the water at a forceful speed through the membrane. The pump can have a pressure in between 150 – 1000 psi depending on the concentration of the salt in the ocean water. In the post treatment stage, the pH level of the water will be adjusted so that it will have a balanced pH.

During reverse osmosis, the salt and all other minerals will be removed from the water. They will make further attempts to remove the pesticides and chemicals in the water as these will go through the membrane along with the water molecules. The advances in reverse osmosis desalination technologies has allowed the method to become more and more cost effective.

Desalination offers a lot of advantages for community living in areas that have dry seasons throughout the year. One advantage is that it offers water that can be recycled and used again and again. The original source is the ocean and the ocean is a large body of water that can provide unlimited water without getting exhausted. Desalination technology can help to address freshwater scarcity problems around the globe. It gives security for coastal communities by providing them with convenient access to fresh water at all time. By having access to their own water supply, they can reduce the cost of importing water from other places.