Posted in Entertainment
Author: Editor  Published Date: October 31, 2012  Leave a Comment on How The Colossal Squid Sees In The Deep Sea

The colossal squid is one of the most fascinating creatures in the animal kingdom. The very mention of it will, for many, conjure up images of maritime myths – emerging from the dark depths of the ocean to claim it’s next victim.

Thankfully, the truth is much different. In 2007, one of these colossal creatures was captured, providing an opportunity to learn more. One of the most interesting findings from this was the squid’s eyes. They are gigantic in comparison to every other known animal.

The Colossal Squid – Into the Deep

It wasn’t until 1925 that the existence of the species was discovered, when two tenticles were found in the stomach of a sperm whale. Since then, the beaks of the colossal squid have been found in sperm whale’s stomachs on many occasions. It’s believed that they can grow as large as 39 – 46 feet in length (around about the size of a bus). 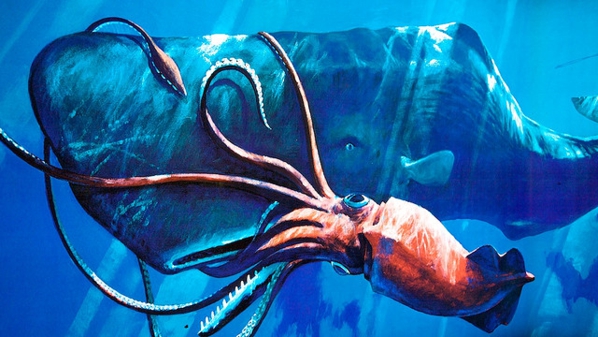 Despite its size, and the findings of their beaks in the stomach of whales, the colossal squid is incredibly  elusive. It was not until 2004 (79 years after the discovery of the species) that a live picture of the colossal squid in it’s habitat was taken.

They live in the deep-ocean, around 1,000 meters underwater, making glimpses of them extremely rare. Observing them in their own environment is almost impossible, even with current technology.

Until recently our knowledge of the colossal squid was very limited. It was known they they were very large, lived in the deep ocean, and were eaten by sperm whales.

Now and again, a decomposed body of one of these squid’s may wash up somewhere, but they tend to be in such poor condition that they don’t provide much of an insight into their life.

A Breakthrough in Our Understanding

But in 2007, fishers in Antarctica captured an intact colossal squid. This presented a very rare opportunity, and the fishers immediately froze the squid to keep it intact.

The squid was transported to the Museum of New Zealand, to be studied by a scientific team led by Dan-Eric Nilsson of the University of Lund, Sweden.

The first thing to stand out was the size of the squid’s eyes, which were about the size of a football (or soccer ball, depending on where you’re from). This left the team with two questions; why are their eyes so big, and what are they used for?

Colossal squids have large pupils and retinas (the retina is the area at the back of the eye which is sensitive to light).This allows more light into the eye. However, calculations by the research team found no additional vision benefits in the deep ocean sea when the eye grows larger than the size of an orange, as water at that depth is very difficult to see well in.

While the supersized pupils and retinas in the squid’s eyes don’t appear to provide a vision advantage in the deep sea, they do provide extreme far-sightedness.

Despite their huge size and the sharp claws on their tenticles, life isn’t easy being a colossal squid. They’re food for sperm whales, which can grow to 67 feet long.

Sperm whales also have a very effective way of finding their prey, which the colossal squid cannot detect – sonar.

When they’re on the hunt, sperm whales dive into the ocean depths using sonar to find their next meal.

Detecting predators is what the colossal squid’s eyes do best. Their huge eyes allow them to detect movements far away – they can detect a faint glow of light 120 meters away (about the length of an American Football field).

Because of its size, when a sperm whale dives down in search of food it disturbs life in the sea. Some of the creatures disturbed by the whale’s movement emit light from their body (creatures which emit light are called bioluminescent). Because of these light emitting creatures, the whale leaves a faint glow of light in its trail. This trail acts as an early warning signal to the squid, which has exceptional long distance vision, and gives it an opportunity to escape from the whale.

The 2007 capture of the colossal squid has provided the world with a fascinating look at the largest eyes in the animal kingdom. It also highlights the irony that the worlds  largest eyes exist in one of the darkest and most unknown places on earth.

Jon Davies is a fan of history and science, and likes learning and sharing interesting facts. He works at Lenstore contact lenses, a online retailer in the UK.