Posted in Lifestyle
Author: Editor  Published Date: September 25, 2012  Leave a Comment on How To Get The Military Chic Look

Military chic is a trend that seems to come and go with great frequency in the women’s fashion world. Championed by the likes of Girls Aloud singer Cheryl Cole, the look is due something of a resurgence in the coming seasons so the likelihood of seeing brass buttons and oversized epaulettes is set to increase exponentially. However, this time around, military chic is set to focus on more feminine styles with an emphasis on more comfortable and form-fitting clothing, replacing the previous box-like and masculine designs which initially inspired the trend. Here are a few tips on getting the latest twist on the military chic look whilst keeping yourself looking and feeling feminine. 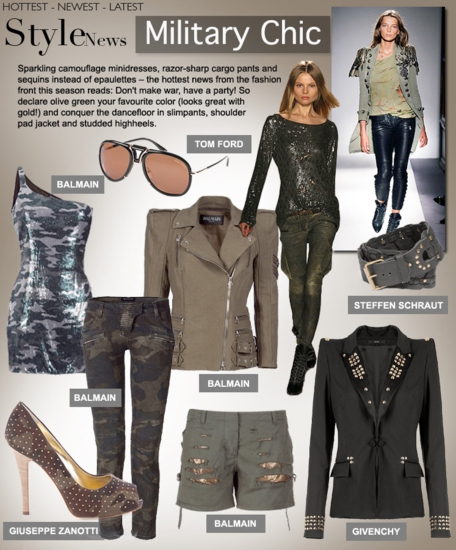 Of all the items on the list, the Military style jacket is the most likely to be seen on the catwalk and least likely to be seen on the high street in a flattering cut so it is essential that a bit of time is spent selecting an appropriate jacket to make sure you spend wisely. The main features to look for on a military style jacket are the obvious examples of double breasted trenches and large, bold brass buttons. Yet rather than plumping for a khaki colour it is possible to go for something much more vibrant, such as blood red, and to shy away from the boxy shape of men’s equivalents; make sure that the silhouette is form-fitting and likely to flatter your figure too rather than bury you under an array of material. The key is to look for a ladies’ jacket with military features rather a military jacket with feminine features.

The obvious way to finish off a military chic outfit is with a pair of large, cumbersome leather boots; they are the perfectly edgy anchor to your outfit. Rather than simply deciding to plump for a jackboot, it is worth considering looking for ways to incorporate boots into your military look which could also be used for different ensembles within your wardrobe. So, for example, a cute ankle boot could be re-appropriated for the military chic look here or, if you are feeling rather daring, knee high boots could also be used. The latter option is particularly a great choice for those looking to add a bit of a wild, sexy edge to their ensemble and is not recommended for the more conservative dresser.

The obvious choice of trouser to plump for would be to look back to the late nineties trend of combat trousers replete with cargo pockets; often this can be teamed with a shortened leg (either ankle or capri) which will further accentuate the boots you are wearing. Shorts are another option to toy with although, once again, these would be ideal in khaki or olive colours. Camouflage variations are to be advised against, however, as they are often seen as rather dated and unlikely to match the feminine look you are trying to cultivate. On top of this it is hard to team camouflage with any other colour or pattern other than itself which would mean either wearing a wildly clashing outfit or going for an all-camouflage look which is not to be recommended.

Keith is a fashion writer who suggests checking out these knee high boots to potentially use as part of a military chic look.