Posted in Home Improvement
Author: Editor  Published Date: October 7, 2012  Leave a Comment on How To Identify Bees, Wasps, And Hornets 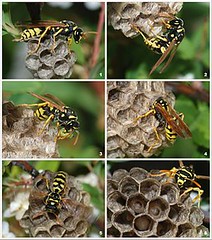 Humans develop the ability to recognize insects that sting and avoid them at an early age. People recognize the shapes and patterns of certain insects as ones that sting usually after being stung once. Being able to specifically identify whether or not it is a bee, wasp or hornet is beneficial when it comes to controlling them.

People see big insects with yellow and no fine hairs, such as bumblebees have, and call them hornets. Hornets are actually big wasps. The Asian giant hornet, found largely in Japan, grows to two inches in length with a three-inch wingspan. It has a highly toxic venom that can kill even a non-allergic person.

Hornets resemble other wasps except for their size and the width of the part of the body just behind the eyes on the head called the vertex. It is larger on hornets. Hornets also start out with small nests to which more small nests are attached. They grow into a colony nest of several hundred hornets. Once it reaches a certain size, a covering is built to surround all the individual nests.

Honeybees and bumblebees have a hairy look that is common to bees. Some hornets have a tiny amount of hair, but they also have a much brighter yellow color than bees. Bees are a mix of black and yellows that are significantly less brilliant than yellow jackets and other members of the wasp and hornet families.

There is no way to tell by sight if a honeybee is Africanized (killer bee) other than to do specific measurements or a DNA check. The instant way to tell is by hive behavior. They are much more aggressive at defending hives. Large numbers of the occupants of a hive will leave it to attack an intruder. They will also chase intruders for a much greater distance than regular honeybees.
Honeybees usually can only sting once since the barbs of the stinger often get stuck in the tissue of the victim. Honeybees often tear out their abdomens and fly away after getting their stingers stuck. The stinger and still pumping venom sacks remain behind. Bumblebees do not have barbed stingers and therefore can sting repeatedly.

Bees also only feed on flower nectar whereas wasps are predatory and will eat overripe fruit, insects and meat. A bee may be attracted to typical sweet human foods, but wasps will actually eat it.

Wasp is a common name for insects of which over 100,000 different species do not sting but are parasitic. They have “ovipositors” that will inject eggs into a host. Other wasps have stingers that inject venom instead. An insect commonly called a “velvet ant” is actually a wasp. Though there are some wingless wasps, the most common stinging wasp species encountered have two pairs of wings that make them much easier to differentiate from bee species. Also, most wasps do not have the hairy look that bees have. There are a few wasps that do have some hair.

Wasps can vary in color. Some are black, black and yellow, reddish brown or bluish black. Some have an iridescent look to wing surfaces. Most people can identify a wasp by the thin area between the thorax and head of common wasp species. However, not all wasp types have this look.
Most of these insects are beneficial in that they pollinate crops, provide food (bee honey) to humans or are predators to pest insects. The professionals at www.blueskypest.com can help when they invade living spaces where their presence can be dangerous.

When trying to distinguish between wasps, hornets, and bees it may be kind of difficult. If you believe you have any issues with any of three insects Blue Sky Pest Control can assist in bee removal, as wells as wasp, and hornet removal.