Have you ever slept on an inflatable mattress? If you have you’ve likely run the gamut of experiences from relative comfort to abject misery. If you’ve owned one, you’ve likely had even more of a roller coaster experience as some last two or three uses while others hold up well for years. Looking at an inflatable hot tub, most of which are made out of similar material to what you’d expect on a high end inflatable mattress may seem like an exercise in futility, but don’t be so quick to judge.

An inflatable spa like an Aero Spa can be picked up for around $500 and will be delivered to your door in a relatively small box that weighs around forty pounds. Unfolding the spa itself will seem a lot like your run of the mill inflatable mattress, except for the addition of a few more plug and play componets and a beefed up control panel. Having seen owners unpack these portable spas with my own eyes, the first reaction is usually skepticism, as if you can hear their internal voice saying, “There’s no chance this thing holds water.” 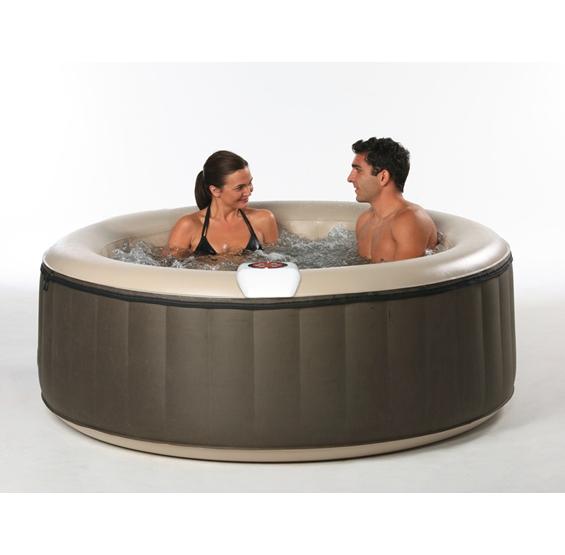 It’s surprising to watch, however, as that skepticism turns into intrigue and later to excitement as the spa begins to take shape. Most of these portable systems use the same engine that fires the jets to inflate the pool itself. This is substantially stronger than the plugin pumps you might be used to, and many systems give you a fully inflated spa in a matter of two or three minutes. Once it’s inflated, there’s usually an attachable filter that needs to be put in place and then there are only three things left to do:

The footprint for many of these spas are pretty small, a spa like the Aero Spa fills up with only about 210 gallons of water, which will take you 30-45 minutes using a typical garden hose. So in many instances, from unpacking the box to having a filled hot tub will take less than an hour. The time consuming piece, however, comes with heating the tub. Not surprisingly, with a tub that costs pennies on the dollar compared to a standard tub, you’re getting much less on the mechanical and electronic side of things. The heaters are small and usually plug in to a standard 120 volt outlet. If you fill up using cold water it may take a day or two to get up to temperature, and these portable tubs will usually top out around 104 or 105 degrees fahrenheit, so don’t expect blisteringly hot water. Also, the filters tend to be fairly weak, so you’ll want to take precautions to keep excess dirt out of your tub, and you’ll also want to skim regularly.

Many users opt for Leisure Time chemicals as they tend to be less abrasive on the mesh body of the tub, and they’ll last a long time considering the small amount of water to be balanced and sanitized. A small spa chemical kit can last you several months if you’re comfortable keeping up your chemical schedule.

Are these spas for everyone? Of course not. However, if you’d like to enjoy some of the benefits of hydrotherapy without breaking the bank, or you’ve got a very small space that may not fit a standard hot tub, it may be worth looking at an inflatable option.