Posted in Creativity
Author: Editor  Published Date: October 26, 2012  Leave a Comment on Is There Really Such A Thing As Fairness In America

How often have you a heard people hoop, holler and bemoan about how life is not fair? That the hand they’ve been dealt is crap, the options to choose between are never good and better, but bad and worse. How the odds are always against them and lady luck has never paid them a single visit.

A Common Misconception
There is an odd view by the hoopleheads of America concerning fairness. It’s a cozy idea that everyone should be given the same opportunity from the start to succeed, thus making success dependent upon the hard work, ingenuity and tenacity of the individual. This is a great idea, and it’s difficult to not agree with. Of course, no child growing up should be given less opportunity than anyone else. However it is both impossible and impractical to put this into place. It would be asinine to think everyone is given the same start, and even more so to try and forcibly put that into place. 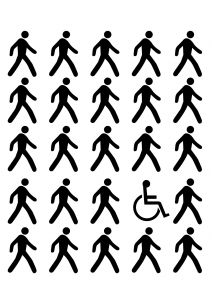 I can understand how nepotism can be viewed as wrong, why should an individual be given opportunity when they have not earned it? In America, we like to believe in meritocracy, which should be devoid of all nepotism, but how practical is that? Would you not help a relative or friend before a stranger, regardless of their abilities or skills? If you said no than congratulations, because you are a true and proper idealist, and if everyone thought as you did than there would be no such thing as playing favorites; which again, ideally, there shouldn’t be.

But we do not live in an ideal world, or a fair world, nor do Americans live in a meritocratic society. It may be a difficult realization, but it’s the truth… there is nothing fair about life. There will always be those who feel like outcasts due to the disapproval of society, those who feel the laws and rules in place were not made with them in mind nor for their benefit, those that see the most worthless individuals rise to power based on association while hard working and intelligent individuals dig holes simply because they were not born into the right family or have the right connections.

For example, it is told to every child in America that if you try hard enough, and study up, you could become the President of the United States one day. The station of President is awarded, by consent of the people, to the best and brightest that our country has to offer. The only way to ensure the best and brightest had an opportunity to become president was to avoid the tyrannical rule of any form of despot from taking power. George Washington himself was offered to become President for a third term, but he denied it saying that no man should hold power for longer than two terms. Otherwise, you may well get some people into power who don’t want to give it up.

Fairness And Presidents
Now you may be wondering why are we harping on old presidents, but remember it’s all in regards to fairness. So throughout time, has the most powerful position our country has to offer been filled in a fair fashion? Have the best and brightest been awarded, has it been devoid of nepotism? Has that position been given based on meritocracy?

The fact is many of you will obviously say no, it hasn’t been fair. It hasn’t been based on meritocracy and is certainly not devoid of nepotism. So let me throw a single fact your way that will prove your uncertainties towards unfairness in this regard. Throughout the history of the US, there have been 44 presidents, Obama being the most recent. Of these 44, 8 have been related on 4 separate occasions. That’s %18 of the total number of presidents. The list is as follows:

So when you look at the most important position in America, that should be filled fairly, you find that nearly 2 out of every 10 were related, and 1 in 5 had an unfair advantage with having family previously in office. Now this is only when we talk about family members, if you dare consider friends and associates as well you will no doubt begin to realize that it’s one great big club, one which admission is extremely difficult to get achieve from the outside.

Lofty Ideas
The point of all this is that Nepotism is indeed destroying America, as many positions are given based on association and not skill or knowledge. This is not exclusive to positions of power either, and when you truly consider it, as wrong as it may appear from the outside, there is nothing unfair about it. Meritocracy is an ideal, nothing more, and should be considered a fantasy or something in place in some great Utopia.

When we say something is not fair, what we are eluding to is that much is gained by others through cheating and trying to achieve an adjust advantage. That while we harp on playing the game in accordance to the rules and standards we deem legitimate, most people would break these same standards if it meant ensuring the best for their family and loved ones. And can you blame them? Who wouldn’t wish and do the best they can for what they love, and who would criticize them for it.

A Change Of Thinking
To bring it all back around, in the opening statement of this article, I talked about the various ways people may complain about how unfair life is. Well is life supposed to be fair? The hand you’ve been dealt is crap, well play what you got with the three options available, hold ‘em, fold ‘em, or bluff ‘em. How the options to choose from are always bad and worse, well within those choices there is still the “better” option. How the odds are always against you, but odds can change.

But the most important point of them all is if you complain how lady luck has never paid you a visit, have you ever really called her name? Have you tried to entice lady luck from across the bar, or did you show up in your stained sweat pants reeking of self-loathing. Luck is a fancy, wishful, mystic, hopeful, belief in something that does not truly exist. Please remember that Luck is nothing more than the residue of design, so if you find yourself lacking it, it’s because you didn’t plan to create any for yourself.

Life is not fair, that fact ought to be accepted by now. When a murderer gets off due to the wit and savvy of his lawyer, he was not lucky. The crack for him to slip through was created well before he committed that crime, so his so called “luck” was the residue of our legal design. Or when bank execs get off with economic murder, it’s not because they are lucky, but for the same reason as before.

So what it comes down to is the next time you feel as though the world is working against you, it’s not. It hardly knows you exist, and isn’t it better that way? When you stop thinking you’ve been given a bad deal, you’ll begin to realize all the opportunities available to you. When you sulk about and wallow in envy and hatred of others, you do yourself no good. They have not wronged you; the system is not in place to keep you down. Briefly back to the presidents, of course it makes sense old presidents helped family members to achieve the same success as themselves, what good is their clout unless you use it. Who wouldn’t do the same, and if you would do the same, it’s time to stop blaming others for your own failures and insecurities. Because life’s not fair, and nor should it be.

The author of this article is Damien S. Wilhelmi. If you enjoyed this piece, you can follow me on twitter @FacePalmLaw. If you or a loved one has been convicted of a crime and live in Colorado, it is highly advised that you seek out a Boulder Criminal Attorney.