Last September, Jose Reyes won the National League batting title on the last day of the season in a game in which he took himself out in the first inning after bunting for a base hit. It was his last game as a New York Met, the team he started with. Reyes left for the Miami Marlins that winter as a free agent, signing a six-year, $102 million contract with a $22 million option on a seventh season.

At the time, it seemed as if Reyes were going to greener pastures. After all, the Marlins were spending money on free agents like Mark Buehrle, Heath Bell, and Reyes, and had a new manager in Ozzie Guillen. The Marlins also had a brand-new ballpark. And the Mets, Reyes’ old team, were in the dumps, with a bad team, and financial problems brought on by the team ownership’s ill-fated investments with Ponzi scheme mastermind Bernard Madoff. 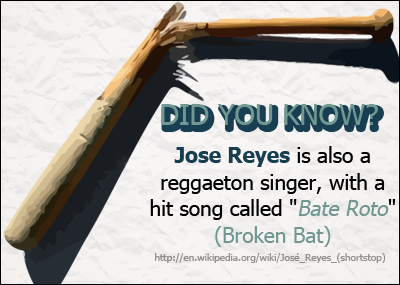 Mets bad; Marlins worse
What a difference a year makes. While the Mets aren’t exactly setting the world on fire – they are in fourth place in the National League East – the Marlins are doing even worse. They are in last place in the division.

And what about Jose Reyes? Well, the shortstop who hit .337 to lead the league in batting, and also led the league in triples at 16 has had an extremely disappointing year, after so much promise. At press time, Reyes is batting just .285. While he has stayed healthy, a concern that many had about him, he simply has not been the impact player that the Marlins thought they were getting.

Jose Reyes had to think that he was going places when he signed with the Marlins, but the only place he went to was last place. The Marlins look bad, with no signs they will improve any time soon. While Reyes is still hitting well for a shortstop – his batting average is second in the league for shortstops, as is his OPS – he is not contending for a batting title, or for the title as one of the league’s top young players.

Is Reyes a keeper?
So what if you are in a fantasy baseball keeper league? Do you want to keep Reyes for next season? Well, he is still only 29 years old. He is still full of potential.  And he is still hitting better than most shortstops, a position in which a decent hitter is very hard to find. So you may want to hang on to Reyes, and hope that he turns it around next year.

Lisa Swan writes for a variety of sports sites, including DraftStreet.com.