The LSU Tigers were a team to beat  in 2011.  They made a run for the national championship only to be demolished by a very good and consistent Alabama team.  The LSU team was built around their offense and one outstanding player known as the Honey Badger Tyrann Mathieu.

This Year Brings Changes
This year however,  brings a lot of change for the Tigers.  Their offense has been completely reshaped with their change at quarterback by putting in Zach Mettenburger.  Also, the Honey Badger decided to leave the team for the year and will not be the Tiger punt and kick returner.  These are both two major blows to this LSU team and at the beginning of the season, I predicted that they wouldn’t be as good as the season before.  They haven’t been able to dominate some lesser  teams like they could last year.  For example, the Tigers were only able to beat Towson by 16, where they could have easily blown them away by at least four or five touchdowns last year.  In addition, they were barely able to sneak out of Auburn with only a 12 to 10 win.  This was the most shocking score of the year for LSU. 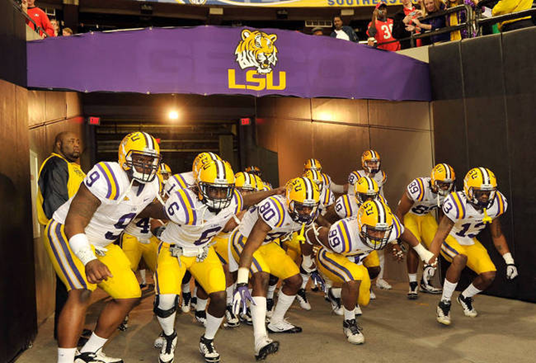 Since this LSU team had such a hard time defeating some of the lesser teams in college football I was intrigued to see how they would fare against a higher ranked team like the Florida Gators.  This week 6 matchup was very interesting for me because even though the Tigers weren’t able to pull out a win, they were still able to keep the game close.  I think the Florida Gators could possibly make a national championship run.

After a heartbreaking loss in Florida, it was vital that LSU came back and got a win against #3 South Carolina.  This was another close game against a good opponent just like the game against Florida the week before.

Looking at the Future for This Team
LSU’s next 3 games are against top 20 teams making this part of the difficult five game stretch of their season.  I am going to specifically look at their game at home against #1 Alabama.  This is obviously the most difficult game of the year.  Thinking about last year and the rivalry that these two SEC opponents formed, this will be a very good game to watch.  Even though the Tigers are looking for revenge, Alabama is just too good to let a lower level team upset them.  The main reason that LSU won’t win this game is because they won’t be able to move the ball.  A 103rd ranked passing offense and a 31st ranked running game won’t cut it against the best defense in college football.

Overall, the LSU Tigers may not be as great of a team as they were last year, but they do have the ability to be good.  A nice winning streak to end the season, including an upset to the Crimson Tide, could still leave LSU in a good position to compete for the national championship.

Colton J. Warren is a sports writer who is addicted to college and pro football.  If you are a LSU fan, visit this website for custom football jerseys:  http://recreationandsportsworld.com/college/lsu-tigers-custom-football-jersey