The crazy looking man in the picture, yes that’s him with the pot on his head, is none other than the American folk hero Johnny Appleseed. Now Johnny, AKA John Chapman, is famous for one reason, and one reason only…. Apples. His story is told to countless children in schools and homes as the man who brought these delicious treats to the people. 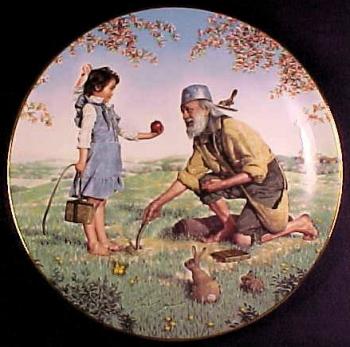 Now what is not told to the children about Johnny, at least nowadays that is, is that the apples he harvested were from cider trees. There are various forms and types of apple trees that are grown, some are for deserts, others for the apples themselves, but good old Johnny specialized in a type of tree that our discussion will revolve around, the Cider tree.

Cider trees are only good for one thing, and that one thing is Cider. You see, Johnny realized back in the day when early settlers were beginning to move west that they were going to be thirsty. Hard ciders could only quench this “specific” thirst as they contained the alcohol people craved. At the time, beer was less poplar and even harder to find. But Hard Cider was abound in the established colonies of the Northeast, and being easily available, those moving to the west wanted their beloved drink to follow as well.

So Johnny being the savvy businessman he was started cider orchards out west so that hard cider could be made and transported out to the settlers. He planted the trees and hired people to live there and tend to the orchards while he traveled around finding new locations. This of course worked tremendously well, and the settlers being so enthused that they could enjoy their hard ciders even whilst exploring new lands, wrote songs and gave praise to the herald of apples… Johnny Appleseed.

America’s love affair with hard cider first began with English settlers. When they first arrived they noticed that there were no decent apple trees beside the tart and sour crabapple. So they quickly made requests to England to have cider apple seeds sent so that they could begin production of cider.

Beer at the time was much more difficult to produce as it was harder to cultivate the barely and other grains required. Not to mention beer did not sit well for long, where as the hard ciders shelf life was quite a bit longer. Beer didn’t become popular until German and Eastern European immigrants arrived, bringing with them an undeniable thirst for beer.

As settlers moved west, they noticed that the soil of the Midwest was much easier to produce barely then it had been in the northeast. So with the right supplies finally, and demand present, the production of beer finally began en masse.

Also, during colonial times, hard cider was the preferred drink overall as potable drinking water was hard to come by. It was not uncommon for children to drink as well, though cider didn’t always contain high alcoholic contents.

John Adams was known to drink a tankard of hard cider every day before going on his morning walks. He admitted that the cider helped calm his stomach down and relieve him of gas. This is interesting as he began drinking before the sun rose as well as before he had consumed his breakfast. He preferred it to coffee and didn’t go a day without it.

Once the production of beer was in full swing due to European immigrants, the consumption of hard ciders began to decrease. European Immigrants didn’t have the same nostalgic taste for cider that early settlers did arriving from England. These immigrants preferred drink more natural to their homelands.

Though the immigrants didn’t have a taste for it, cider production remained at about the same rate as those who did enjoy it, remained doing so. It wasn’t until a few hundred years later when the Prohibition and Volstead Act was put into law that cider truly began to fall off.

After prohibition, cider lost its allure for most Americans. Beer and hard liquors were the call of the day. Not to mention many orchards were burned down during prohibition, so production of cider was difficult to pick back up. Without the trees, cider apples would have to be imported which was both difficult and expensive, while barely was in full production. So from a business stand point, if you wanted to make alcohol, as well as a profit, there was only one obvious choice.

In 2007, Woodchuck Cider became the first hard cider to sell over a million cases in America. If you have not tasted one of their numerous flavors, you should do yourself a favor and do so. You would be paying American history a little due respect in the process.

But smaller breweries have begun to offer ciders as well, as they see its popularity on the rise. There is a large market for Glutton free products which cider can be, and ciders are perfect for the summer time. They are crisp and refreshing, while the buzz you receive from them is pleasant. It is not the sedated feeling you receive from harder liquors and beers. They also often come with very high alcohol contents, so if you would care to let loose, it wouldn’t take many.

The author of this article is Damien S. Wilhelmi, an SEO consultant and Internet marketing guru. I am writing on behalf of liquormart.com in regards to their online liquor sales.