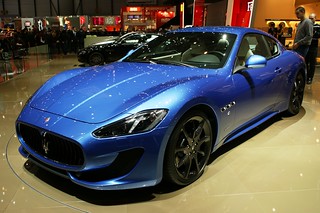 Here is a car that has just recently been released but it already has managed to draw a significant amount of attention to itself: the new Maserati GranTurismo Sport.

If you count the GranTurismo S manual and automatic transmission models as just one design, then this would make it the sixth variation on the GranTurismo model so far. However, taking into account that the GranTurismo design is not only gorgeous and a huge success for Maserati, but it is also just 5 years old, it would be a pretty safe bet to assume that it will not be the last GranTurismo we see put on the road. But until that time the Sport version shall remain the definitive car to own when it comes to fast, high performance Italian supercars.

Why the Sport Version?

The Sport version has been described as being the replacement for the GranTurismo S. In addition, the original S version was seen as the middle child between the standard GranTurismo and the MC variation which took every chance to lighten the load and shed some features in exchange for more power. That pretty much made it the preferred choice for everyone that wanted as much power under the hood as possible without sacrificing any of the gadgets and features that most race cars do without. So the GranTurismo Sport has some pretty big shoes to fill, but it actually does it splendidly. In fact, this new Maserati packs a bigger punch than even the MC Stradale model, with 10 more horses under the hood. However, if Maserati’s logic up until this point is anything to go by, then a new and improved MC model should be coming out later in order to maintain the Sport’s position as the medium performance GranTurismo, so all the race enthusiasts that want the best performance possible might want to hold out for that one. On the other hand, everyone else that is purely interested in an amazing driving experience can go ahead with the GranTurismo Sport.

Maserati already has a pretty big driving pedigree so it does not have to work very hard to impress its audience with this new car. Also, the GranTurismo has already been a huge success, both critically and commercially so everyone already has a good idea of what to expect from the GranTurismo Sport when it comes out later this year. Simply put, it is more of the same, but better. However, just to satisfy the gearheads around the world, let’s go through a quick rundown of the improvements and changes being made to the formula.

First off, the engine. The original S version had a 4.7 L V8 that managed to produce 434 horsepower, which was 35 hp more than the original GranTurismo, but 10 less than the big man on campus, the MC Stradale. Well, speed freaks can rejoice: the new one has the same V8 engine, but with some tinkering that has managed to increase its power to 454 hp, more than the built-for-racing GranTurismo MC. This equates to 0 to 60 in just 4.7 seconds. Don’t expect to get the cheapest car insurance with this kind of power under the hood, but if money is not an issue this supercar promises provide one of the fastest rides out there.

Design changes have been few, but they are noticeable. The biggest one of them all is a new front bumper. This new design is not only supposed to be more stylish, but it is also claimed that it can direct the air flow better, which leads to improved cooling on the front-wheel brakes. Noteworthy is also the fact that the lights have also been improved thanks to the addition of DRL LED technology. However, the last design choice which is sure to grab the people’s attention is the new color the car comes in. Named Blu Sofisticato, this new dark blue tone is certainly drool-worthy and did a great job of making sure that the new Maserati GranTurismo Sport stays on people’s minds long after the two have parted ways.

Phil Albert dreams of owning a car like this one day. He’s not expecting it any time soon though.