Posted in Entertainment
Author: Editor  Published Date: September 5, 2012  Leave a Comment on My Hard Rock Concert Experience – Things To Do And NOT Do To Get A Good Pit Experience

Going to a rock concert can be an awesome experience, but it can also be a frustrating one as well if you have never been to one before. I recall my first ever Bullet for my Valentine rock concert, it was really sick. They were on tour with Three Days Grace and they were headlining with Avenged Sevenfold in Nashville, TN. I actually go there hours early because I had VIP Pit passes and wanted to get as close to the stage as possible as that was a GA standing pit.

This is where things got a little tricky and there are something’s that I recommend you do if you have a General Admission pit passes and you are trying to get to the front of the pit to see your favorite band. 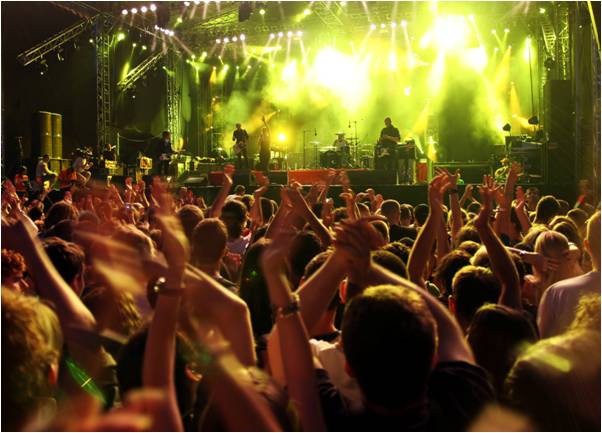 Don’t Drink a Ton of Liquids before going INTO the Venue
This is very important, as not only was I going in with over 600 other people at the same time, but I also decided to drink a bunch of water before getting in line, so when I got into the venue the first thing I had to do was run to the restroom. Luckily I was one of the first one’s in the restroom so I was in and out, and I was able to get a pretty decent spot in the pit, I was about 4 rows from the stage, so not too bad.

Get Your Food and Refreshments BEFORE finding a Seat
I was all in a hurry because I had to stop at the restroom on my way in; I forgot to get my drinks and food before finding my seat, so I had to then go back out to main lobby to get them. Well, there is NOTHING worse than trying to fight a crowd of HUNDREDS of people while you try to get BACK to your wife who is in the 4th row. It seems that in the 10 – 15 minutes that it took me to go out to the lobby hundreds of more people had already filled into the arena.

Bring Tylenol if you get Headaches Easily
So I was able to actually get back to my seat finally, and get settled in and ready for the show to begin. Then all of a sudden out of nowhere (and no the music hadn’t even started), I started getting a massive headache. There is nothing worse than sitting four rows from the stage and have a pounding headache before the show starts, because you know it is only going to intensify once the music begins.

So, one thing to keep in mind when attending these types of hard rock concerts is make sure you have your priorities in order. Make sure that you have a plan and arrive early to the venue to make sure you can get your things before you go find your seat, and still be able to get a seat close to the stage.

Article provided by Shawn Lindsey about his concert experience in Nashville, TN – click the link for more information over this band or to buy Bullet for my Valentine concert t shirts