There are more good tight ends these days, but you’ll have to pick one early to land a great one.

Rob Gronkowski, New England Patriots
All Gronkowski did in 2011 was set new tight end records for yards (1327) and touchdowns (17).  (He also had one rushing TD.)  Gronkowski’s no one-year wonder – he had 10 touchdowns as a rookie in 2010. Gronkowski had ankle surgery in the offseason, but appears fully recovered. 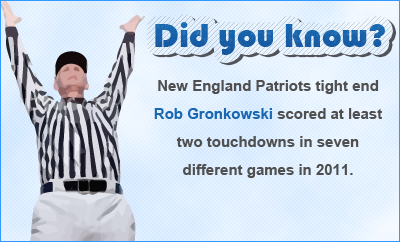 Jimmy Graham, New Orleans Saints
Graham joined Gronkowski in breaking Kellen Winslow’s 1980 record of 1290 receiving yards by a tight end. Graham had 11 touchdowns after having 5 in his rookie year of 2010. As with Gronkowski, Graham is entering his third season as a top target from a top quarterback.

Antonio Gates, San Diego Chargers
Gates set the record for touchdowns by a tight end in 2004 with 13 (later tied by Vernon Davis and broken by Gronkowski). The consistent Gates then had between 8 and 10 touchdowns every year from 2005 to 2010 before catching 7 in 2011. Gates is now 32 and Injuries caused him to miss six games in ’10 and 3 in ’11, but he is said to be completely healthy for the first time in two years.

Aaron Hernandez, New England Patriots
Hernandez is yet another third-year tight end who followed up a promising rookie 2010 (6 touchdowns) with a great 2011 (910 yards, 7 touchdowns).  Hernandez may be overshadowed by teammate Gronkowski, but with prolific Tom Brady spreading the wealth, Hernandez could be almost as productive at a much lower pick.

Jermichael Finley, Green Bay Packers
Finley’s 8 touchdowns and 767 yards in 2011 were personal bests.  Playing in the Packers offense, Finley has potential for a lot more, especially if he can cut down on his drops. But Finley has been plagued by injuries – only starting 18 games over the last two years and missing most of this preseason.

Vernon Davis, San Francisco 49ers
Davis tied Gates’ record of 13 touchdowns by a tight end in 2009 (broken by Gronkowski last year) but has otherwise never had more than seven touchdowns in a season during his six years in the league.  He was sensational in the postseason last year, however. In two playoff games, Davis had four touchdowns and 292 yards.

Jason Witten, Dallas Cowboys
Witten has started at least 15 games in eight straight seasons and has at least 940 yards in the last five.  Except for 9 touchdowns in 2010, Witten has not been a prolific scorer (5 touchdowns in 2011). Witten suffered a lacerated spleen during the preseason and will probably miss at least the first game of the season.

Brandon Pettigrew, Detroit Lions
Pettigrew finished seventh among all players in receptions for 2011 with 83 after catching 71 in 2010. His 777 yards and 5 touchdowns were career highs, but not great considering the Lions’ passing attack, in which backup tight end Tony Scheffler had 6 touchdowns.

Fred Davis, Washington Redskins
Davis had 796 yards and 3 touchdowns in 2011, but missed the last four games due to a drug suspension. The Redskins gave Davis the franchise tag and released longtime starter Chris Cooley in hopes that Davis can blossom with new quarterback to Robert Griffin III.

Tony Gonzalez, Atlanta Falcons
Gonzalez is 36, but has started 16 games in 12 of the last 14 seasons, and in the other two seasons he started 15 games.  He had his usual dependable production in 2011 with 80 receptions for 875 yards and 7 touchdowns.

Jacob Tamme, Denver Broncos
Tamme is reunited this season with Peyton Manning. When they played together in Indianapolis in 2010, Tamme has 67 catches, 631 yards and 4 touchdowns in ten games after Dallas Clark went down for the season.

Jermaine Gresham, Cincinnati Bengals
Gresham had 6 touchdowns in 2011, up from 4 in his rookie 2010. He’s gone over 50 catches both seasons.  If quarterback  Andy Dalton and wide receiver A.J. Green build on their successful rookie seasons, Gresham’s numbers stand to benefit.

Ben Hargrove writes for a variety of sports sites, including DraftStreet.com.