One of the most popular kinds of poker that people enjoy with playing cards is Texas Hold ’em. This game has grown in such popularity that it has been featured on television shows like the World Series of Poker on ESPN and Celebrity Poker, luring in new players every day. Along with watching celebrities and professionals play, people can play in casinos or even on the Internet; playing poker is just a click away–but nothing quite beats playing with standard playing cards. 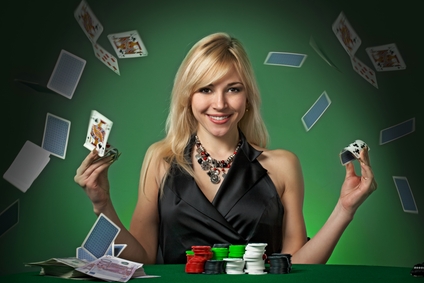 No Limit Hold ‘Em
In all variations of Texas Hold ’em, the dealer shuffles the deck of playing cards and deals two per player. Players couple their cards with a set of community cards that are placed on the table during the game in an effort to get the best hands.

There exist two primary types of games, with the first one being “limit.” This means there’s a maximum to the amount one can put up during betting. In the more popular version, “no limit,” there is no cap. This means players can go “all in,” putting every last chip they have into the pile to place a bet.

Dealing and Betting
As previously stated, the dealer deals a pair of cards per player. The players spend a round betting, and then the dealer discards the top card of the deck, which is known as burning the card. The next three cards are put amid the table with the suit and numbers facing upward for all to see. This is the “flop” of the community cards.

A final round of betting occurs before the remaining players reveal their cards. Typically, players use their pair of cards and the three best community cards to make their best possible hand with the winner getting the pot. Sometimes, the five community cards present the best hand for all players, which results in a tie and splitting the pot.

Rules of Betting
Whether playing with limits or not, both variations of Hold ‘Em require bets on each hand, and these are known as blinds. Only two players need to post blinds during a hand; the player directly to the left of the dealer puts up the “small blind,” and the player to his left puts up a “big blind,” which is twice the small blind.

Normally, the big blind is 1 percent of the minimum players need to start the game with, and they’re posted before any dealing occurs. The player to the left of the one who had to post the big blind starts betting during that hand. Raising during betting needs to be twice the big blind amount or greater, though anybody can go all in during no limit.

This post was provided by Jill Vinson, a card game enthusiast. She gets hers playing cards and other supplies from Straight Poker Supplies when she plays with her friends.