It’s probably fair to say that with so many weird and wonderful pets occupying households the world over, fish are far from the most difficult of pets to look after. It’s not as if they crave the kind of love and attention you’d have to lavish a puppy with, but at the same time it’s crucial not to simply assume that fish will look after themselves…they won’t.

Contrary to popular belief, there is in fact quite a lot of work involved in maintaining a home aquarium, at least to such a standard that will keep your fish healthy and happy. While it remains the approach of so many, it’s not quite as simple as filling it with water, adding fish and then sitting back to enjoy the show for several happy years. This is exactly the kind of presumption that leads to mass fish genocide on a pretty horrific scale, which is why it’s important to invest the necessary thought in the idea before going ahead. 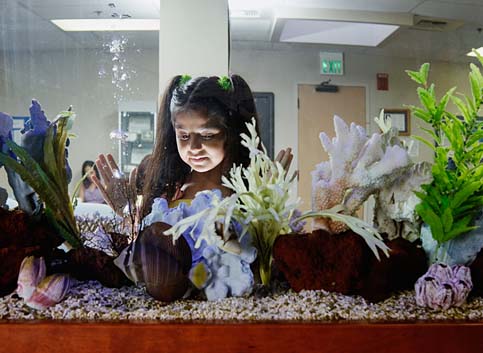 So, if you’re giving real thought to taking the plunge with a home aquarium, be sure to ask yourself these essential questions first:

Do I Have the Time?

First of all, you need to think carefully about how busy your life already is and whether or not you’re realistically going to have the time needed to look after a tank full of fish. On a pretty regular basis you’ll be needing to carry out partial water changes, clean the glass, check the filters and so on and so forth, which aren’t the most challenging of jobs but do nevertheless take time to carry out. So, if you’re already in a situation where time just isn’t a luxury you have, don’t rush into a decision just yet.

Do I Have the Space?

Having space for a fish tank at home means so much more than physically being able to get one installed. For example, that corner of the living room might indeed look great with a tank in it, but if it would mean having your fish about 6 inches from a radiator, chances are this isn’t going to work. Likewise, if the area you’re considering for the tank is one that’s prone to getting bashed and battered about every hour of every day, your fishy friends really will not last long. Consider the space you have and whether or not it is appropriate for an aquarium.

Do I Know What I Need?

It’s not as if any newcomer is going to know the ins and outs of commercial aquarium chillers, heaters and all other technical bits and pieces, but at the same time it’s crucial to look into exactly what you need to get up and running. Depending on the type of fish you wish to keep, you’re going to need a pretty sizeable array of products and provisions to create the right environment for your fish. And it’s not a case of buying a ‘bit here and a bit there’ either – you need to have EVERYTHING you need up and running before even thinking about bringing home your first fish.

Do I Need Advice?

While it’s never been easier or cheaper to buy everything you could ever need to get set up online, there’s so much to be said for reaching out to the experts for a little advice before going ahead. Whether it’s popping into a local store or giving the online retailer a call to discuss your plans, it pays to get the input of the professionals before going ahead.

How Many Fish Do I Want to Keep?

This is important because there are very strict rules with regard to how many fish you can get away with in any given tank of any size. To break these rules is to risk killing every fish in your tank and is therefore a wholly unacceptable way to go, so prior to investing in the tank and the rest of the equipment, think carefully about how many fish you intend to keep.

Is It Generally a Wise Idea?

Last but not least, fish may play an ornamental role in the household but they are living creatures nonetheless that you yourself are responsible for. As such, you need to consider not only whether you want an aquarium, but whether it’s generally a good idea or not for the sake of the fish themselves. If, for example, your home is one that’s particularly chaotic with five kids, six dogs and a dozen cats running around at all times, introducing what are wholly sensitive and fragile new pets might not be a good idea.