The city of Jaipur is referred to as the Pink City because of the rosy hue of the buildings and walls. This beautiful Indian city is filled with museums, palace, forts and many other interesting things to do.Its gorgeous ancient palaces and forts are a reminder of an era gone by and this architecture will create a stunning backdrop to your explorations. 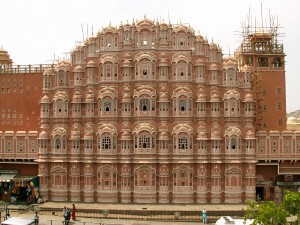 There are many things to see and do during your visit to Jaipur. Here are a few ideas to consider while exploring this beautiful city.

Marvel at the City Palace

This stunning building is where the royal family of Jaipur once lived and it is a stunning and ornate testament to their wealth. The expansive courtyards, buildings and gardens are a beautiful blend of Mughal and Rajasthani architecture, and the Peacock Gate is a beautiful example of detailed craftsmanship. The royal family now resides in the Chandra Mahal or Moon Palace. Inside the City Palace complex you will find a museum, an art gallery and many interesting displays of custom and antique Indian weapons.

You’ll find monkeys everywhere at this beautiful ruined temple, climbing up the walls and bathing in the sacred pools of water. There are thousands of them and they are not scared of people, so they will likely walk right up to you and take fruit from your hand.

The temple is an adventure to get to as it is surrounded by two granite cliffs, but it is certainly worth the effort. Keep an eye on your belongings as curious monkeys have been known to grab purses and handbags and run away with them to inspect the contents!

It is free to visit this temple and the best time to go is during the late afternoon around sunset, which is when you will see the most monkeys.

This fascinating site was constructed between 1727 and 1734, and while on the surface it just looks like a collection of sculptures, it is actually a highly specialised astronomical observation station. Each of the 14 sculptures has an accurate scientific function, such as predicting eclipses, measuring time and tracking the movements of stars. One of the most amazing structures is the SamratYantra sundial which stands 30 metres tall. If you watch it long enough, you can see its shadow moving around the clock face, displaying the time.

Ride an Elephant on a Safari

Jaipur is known for being a great place to ride an elephant and the elephant safaris are a thrilling way to explore the lush and wild countryside that surrounds the city. You can take an elephant ride through fields, hills, ancient monuments and villages. There are several different companies that offer elephant safari tour packages, during both day and night.

Take a Tour of the Amber Fort

This is an enormous fort-palace complex that was constructed in the Hindu-Muslim style and dates back to the 1600s. Many people commonly think that the name comes from the pastel yellow shade of the fort, but it actually refers to the town of Amber which is named after the goddess Amba.

One of the most spectacular sights of this fort is the thousands and thousands of glittering mirrored tiles on the walls and the ceiling of the Sheesh Mahal. The grounds of this fort-palace complex are huge, so it is worth hiring a guide to help you understand what you are looking at because the information panels can be somewhat limited. The guide should not charge you more than 100 rupees.

Feel the Breeze at the Palace of the Winds

This unique five-story palace resembles a honeycomb, with 953 small windows decorated with ornate and detailed latticework. It was designed to allow the women of the royal family to watch life in the streets below them without being seen, as they were required to keep their faces covered.

The best time to see the palace is in the early morning when it’s illuminated by the golden light of the sunrise.

About the Author: RekhaTrehan is a travel writer and blogger who spent a month in Jaipur. She found great prices for Jaipur hotels on Expedia during her stay.