The American Civil War has been called the first modern war because of advances in weaponry. It used every type of weapon from machine guns and artillery to muskets and repeating rifles.

Arms were made domestically and imported from other countries, but some had the distinction of being rarer than others. This could have been because they were more expensive or simply were replaced by better models, but they all have made their mark in Civil War history.

Hand Guns
Hand guns came in many shapes and sizes from the occasional muzzle loader and revolver to the single shot derringer. The Colt Model 1860 Revolver ruled the Civil War, but there were many others that played a part on the battlefield.

God made man, but they say Sam Colt made them equal. The Colt Dragoon Revolver was issued to the members of the U.S. Calvary to kill the mounts of enemies. It was a .44-caliber revolver that was developed during the Mexican-American War. There were about 8,300 of the revolvers ordered.

While there were 25,000 of the single-action Starr Revolvers used by the Union Army, it’s double-action cousin was used only for a very short period. There were only 3,000 of the .36 caliber percussion Navy revolvers produced. The primary reason it wasn’t used long was the U.S. Ordinance Department asked for a single-action model after discontinuation of the Colt. 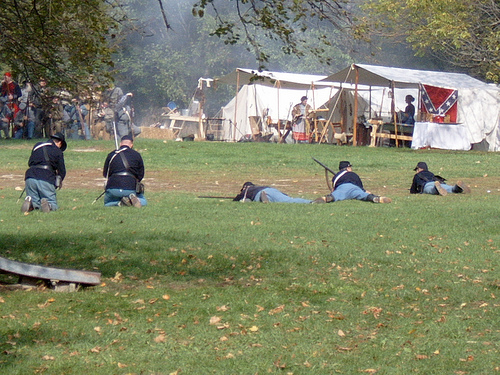 During the Civil War, guns were more important than swords, but there were a few Elgin Cutlesses still in use. The Elgin Cutless had a 11 1/2-inch Bowie knife blade outfitted with a .54-caliber single shot pistol. It was used by the Navy for use during boarding parties. Instead of being a gun outfitted with a knife, it was a knife outfitted with a gun. It was later replaced with the M1860 Cutless, which was in use until the 1940s.

Rifles
The Whitworth Rifle was a muzzle-loaded rifle used by Confederate sharpshooters and outfitted with brass scopes. This was a long-range rifle of British design that used twisted hexagonal barrels instead of round. This allowed for increased accuracy, but the British rejected the design because the barrel fouled. It also cost four times more than the Enfield Rifle. Despite this, some were ordered by the Confederates.

Sam Colt may have led the way with revolvers, but the same couldn’t be said for his revolving rifles. The Colt Revolving Rifle was was designed to increase the firing rate of rifles and included a revolver design rather than carbine or bolt action. The Union used these rifles in the Battle of Chickamauga. Confederate forces were so shocked by the rate of fire that they thought they were being attacked by a full division instead of a single regiment. Ultimately, it was discontinued because of chain fire issues and the spraying of lead splinters into the hand and wrist of the person firing.

Before there was the Winchester Rifle, there was the expensive and highly-prized Henry Rifle used by both Union and Confederate soldiers. The .44-caliber rimfire breech-loading rifle was an improvement over the Volcanic Repeating Rifle. It was never purchased by either side officially, but soldiers bought them individually with their own funds. It had a rate of 28-rounds per minute and used by scouts, skirmishers, flank guards and raiding parties.

The Gatling Gun
While often seen in Hollywood movies, the reality is the Gatling Gun didn’t see much action in the Civil War. It was the first real machine gun used in warfare and was able to fire 600 rounds per minute using a hand crank that rotated six barrels around a central shaft. The gun had several problems including alignment issues affecting accuracy as well as being fragile and expensive. While manufacturers couldn’t get the military interested, Maj. Gen. Benjamin Butler bought 12 at $1,000 a piece to use in Petersburg in 1864.