Posted in Traveling
Author: Ryan  Published Date: October 6, 2017  Leave a Comment on Religious and Spiritual Places To Visit In Manali

Apart from being one of the most sought-after hill stations in the north India, Manali also has a number of ancient temples with striking architectures known for their religious values. Manali is the abode of spirituality from many centuries. Manali is blessed with many temples symbolizing faith and traditional beliefs of the people.

This ancient cave temple is dedicated to Hadimba Devi who was the sister of the Demon God Hadimb, a character of Mahabharata. Located at the foothills of Himalayas, the temple is surrounded by cedar forest and is one of the major attractions to be included in the list of Manali tour packages. Built in the year 1553, the four-storey wooden temple was built in Pagoda style. Hadimba Devi Temple does not have any idol. People worship the footprint on a stone.

Located around 3 km from Manali on the banks of Beas river, Vashist Temple is best-known for its hot sulphur springs. The spring is believed to have some great healing powers and many people consider taking a dip in this water to be sacred. The pyramidal stone temple is devoted to Vashist Muni, one of the seven renowned sages of Hindu. Built in a traditional style, the temple has a lot of intricate wood carvings. 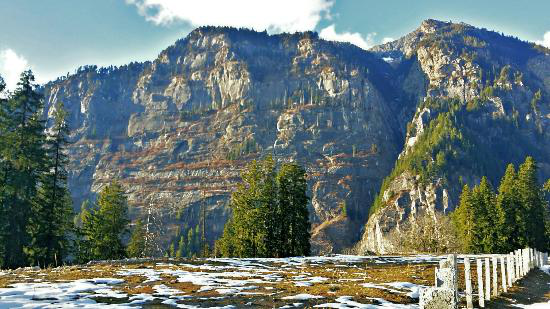 Believed to be the only temple of Manu (creator of the human race on earth) in India, Manu temple is at a distance of 3 km from the main market in Old Manali. The Pagoda style provides a glimpse into history, spirituality, and architecture. The surrounding views of the mountains, valleys, and the presence of the river Beas are quite fascinating and adds to its attraction.

Jagatsukh is the biggest village in Kullu district and was the former capital of Manali. Located at a distance of 6 km from Manali in the northern end of Kullu valley, the temple is dedicated to Lord Shiva. Built in Shikhara style, the temple dates back to early 8th century. The temple has a similar architecture as that of the Naresar group of temples. Surrounded by lofty snow-capped mountains and picturesque valleys, the temple looks more striking during the winters.

Located at a distance of 15.5 km from Manali, this ancient temple is dedicated to Lord Shiva and Goddess Parvati. The temple is at Darshal village and the area is largely dominated by Brahmins and Rajputs. The temple has a noteworthy historical past. It is built in Shikhara style architecture with beautiful stone carvings. The temple It is believed to be the last standing structure of the Gurjara-Pratihara traditions.

Most of the Manali tour packages include these temples as a part of their itinerary. Try exploring this aspect of the hill station during your visit to Manali. Make time to offer your prayers at the most sacred places of the region.