Vietnam is a beautiful country, with French colonial houses scattering the vast green countryside as you travel down the East coast and through the rice paddies. I was travelling around South East Asia with two of my best girlfriends, Ashley and Nicola, and although Vietnam was only the second country on our long list, by the time we’d arrived in Saigon (the capital city, South Vietnam) we thought we were pro’s at this backpacking malarkey.

No longer were we terrified to cross the roads, even though there were thousands of mopeds speeding past every two minutes, we’d figured out the trick! Walk don’t run, the locals, a dab hand at speeding down the narrow streets, quickly dash around you as you slowly walk on by. We’d finally stopped being ripped off, by bartering for everything with our friendliest smile and sternest head 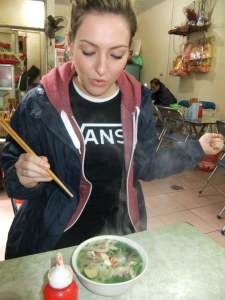 shake, and finally we’d grown accustomed to living off ‘Pho’. A Vietnamese specialty, noodle soup made at the side of the road by food vendors, some of the more questionable stalls aren’t for the weak hearted (or stomachs). We had got this travelling game well and truly sussed! Or so we thought…

We arrived in Saigon very tired after a long, bumpy journey on a ‘sleeper coach’ from Nha Trang. It was late at night and we hadn’t arranged any accommodation, this was our first mistake, we trawled the narrow passageways of the city trying to find a guesthouse with a room for three that wasn’t going to rip us off, as we were on a serious budget. Eventually after 30 minutes or so of carrying around our 15kg plus backpacks we found a cute little guesthouse run by a charming Vietnamese family. The mum checked us in, dad slept on the sofa and her sons helped us carry our backpacks to our room. 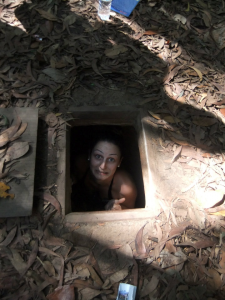 Before we got in bed that night we pulled out our Lonely Planet book and arranged our itinerary for the following day, we might be tired but we had a lot to see and weren’t prepared to miss a thing. We decided we were going to pay a visit to the Cu Chi tunnels, hundreds of tunnels constructed underground when the French colonised Vietnam in the 1940’s and later used during the war against the Americans in the 1960’s as a shelter, defensive mechanism and form of attack. We woke up early the following day, put the same clothes on we’d be wearing for the past couple of weeks (as we hadn’t planned on the weather in Vietnam being so changeable, and hadn’t packed too many warm clothes) and headed to the nearest travel agents.

In the travel agents we’d booked on to the tour and were waiting around for our pick-up, you do a lot of waiting around in Asia! So we decided to quickly grab an iced coffee, our new favourite drink, if the Vietnamese do anything well its coffee (and Pho). So, we grabbed our coffee and headed back to the travel agents for some more waiting around. However, on our return I spotted a familiar face, I was half way around the world, in the middle of Vietnam and I bumped in to an old friend, Zak, who I used to work in a bar with! It was extremely random but it had me and the girls were very excited, we spent the whole of the bumpy, crammed bus journey to the tunnels swapping travelling stories, talking about how we were never going home and planned to hit the town together later that evening.

If you ever visit Vietnam make sure you visit the Cu Chi tunnels, the story behind them is fascinating and crawling through some of the narrow tunnels (widened for Westerners) you can relate to the terror and the bravery of the Vietnamese during the treacherous invasion of the Americans in the 1960’s. Although most of our spirits were dampened by the end of the day, due to the horror stories we’d seen and heard that day, we decided it’d be a waste of the evening not to paint the town red, especially after our chance meeting in Vietnam. So we did.

Me and the girls headed back to our humble guest house, got very quickly changed, applied minimal make-up (just enough so the boys could see we’d make an enough but not so much that we didn’t look like scruffy backpackers any more) and headed in to the city. We’d been warned before we arrived in Saigon that it was famous for theft, with thousands of backpackers having their belongings snatched each day. But we were expert backpackers by now, a little intoxicated and invincible! So we bundled all our belongings in to the one bag (decided we’d take turns in carrying it) and headed out to meet up with the boys. Saigon has a brilliant night life, there are plenty of bars, clubs and street stalls to keep thirsty travellers entertained. We all danced the night the night away, drank far too much vodka red bull and caught up on what we’d done since we’d last seen each other. It was time to call it a night.

Me and Nicola headed outside whilst the boys and Ashley waited around inside to pick up their jackets. We waited on a nearby step and decided it would be a good idea to send a few drunken text messages home. As I was texting, and generally laughing at me and Nicola for being drunken idiots, a small hand reached over my hand and grabbed the phone right out of it. Although I was shocked, and drunk, my reactions were quick and I grabbed the phone straight back, his reactions were quicker, he reached for the bag beneath my legs (the bag that we’d put all of our belongings in – phones, cameras, cash, cards, make-up!) and ran.

I was shocked and a little confused but my first reaction, rather foolishly, was to chase after him. Nicola and I ran as fast as we could, after this young (no older than 15 years old) Vietnamese child, as he headed down some rather questionable alleyways we continued our pursuit. It was hopeless, he’d done this a thousand times before, we didn’t know where we were going and we were drunk, eventually we gave up. Nicola was in tears by now because of the shock (and probably the alcohol) and I was angry but stayed calm, we headed back down the alleyways trying to figure out where we were. We were lost, we had no idea how to get back and we’d left Ashley, and we couldn’t ring her because her phone was in the bag. We decided to cut our losses and head back to the guesthouse; hopefully Ashley would be safe because she was with Zak and Andrew.

It took what seems like forever to get back to the guest house; we could barely remember the name and had to rely on the friendliness of the locals to point us in the right direction. Saigon is like a maze, but eventually we found the alleyway where our guest house was hid and crept upstairs to our room. We had to search our backpacks to make sure we still had our passports, we couldn’t remember with the events of the evening if we’d taken them out or not, and call the emergency numbers of all our cards to cancel them. Nicola was still in tears and I was starting to panic about Ashley, was she still with Zak and Andrew? Did she have somewhere to stay for the evening? After ringing various numbers, cancelling four or five cards for both me and Nicola (Ashley would have to cancel hers when she returned) we finally both curled up in bed. I’m not sure if it was the vodka red bull or the fact that we’d just been mugged in a foreign country, but I didn’t sleep a wink that night. I just kept playing the events over and over again in my head, what could I have done differently? What if it had been worse? What were we going to do for money?

Early the next morning (I still hadn’t slept) Ashley came bursting through the door, screaming at me and Nicola for leaving her in the middle of Vietnam. The room erupted quickly and soon all three of us were screaming at each other, Ashley at us for leaving her, me and Nicola at Ashley because we’d been robbed and she was nowhere to be seen. After we’d all calmed down, had another little cry and cancelled Ashley’s cards, we headed to the local police station.

The local police station was an experience within itself, I don’t know if they just genuinely didn’t care or they were just sick of tourists coming in crying tales of woe about all their money and expensive things being taken from them by a child who can barely afford to eat. Either way they were extremely unhelpful, in the end we gave up. We had to cut our losses, except that we were all safe and everything we had lost was replaceable. When I think back it’s kind of tragic that the poor 15 year old Vietnamese child was roaming the streets at 4am in the morning to steal from tourists to feed his family. We had our health our happiness and were living our dream; we’d get over the robbery.

What would I do differently next time? I’d make sure I’d told my family about money transfer banks such as Axia FX, my family could have instantly transferred me money in my hour of need.

We all laugh about the robbery now; it was just another experience on our adventure. Aside from this Vietnam still remains my favourite country in South East Asia. We were no longer invincible, but that was probably for the best, we had wised up an awful lot.