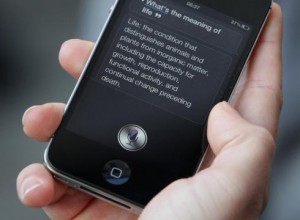 Each year Apple seems to bring us a little bit closer to living in the “Star Trek” universe, and its release of the iPhone 4S was no exception. As always, the phone is faster than its predecessor, but the biggest benefit it provides is access to Siri, a virtual personal assistant that uses voice recognition and spoken responses to let you search, make calls, and manage your calendar hands-free.

What elevates Siri above a standard search tool is its integration with other apps on your phone. It works seamlessly with most of Apple’s core iPhone 4S apps and intelligently parses commands based on what you’re trying to do. It also deals well with scheduling conflicts, making it a great tool for setting reminders, as it reminds you of existing obligations and lets you move things around without ever touching the phone or looking at the screen.

Siri also adds dictation capabilities to the phone. This was previously available via third-party apps, but now it is a core feature accessed by pressing the microphone icon on the virtual keyboard.

Out of the box, Siri does a good job of parsing commands, and it also analyzes your voice as you use it to improve recognition over time. It goes well beyond simple searching and reminder settings, doing useful things such as automatically adding tags to entries on your contacts list and asking follow-up questions to proactively clarify requests. For example, if you say, “call Mom,” Siri will ask you who your mom is, and then add a “mom” tag to that entry. In the future when you say “call Mom,” the program reads the tag and makes the call without needing to ask you for more details.

This type of natural language recognition, searching, and follow-up questioning requires a lot more computing power and storage capacity than is available in today’s smartphones. Siri gets around these limitations by using cloud computing to do all the heavy processing and handle the massive storage requirements, which explains why it requires a wireless connection to operate.

According to the patent Apple submitted for the service, when you access Siri and say a command, the software does what it can internally to process your language before sending it on via the Internet to Apple’s cloud computing facilities. These use many computer servers running in parallel to analyze what you said, run a search related to it using Wolfram Alpha and other search tools, and then pass the results back through the Internet to your phone.

The downside to this approach is that if Apple’s servers go down, Siri doesn’t work at all, but when things run as they should, the service works quickly and with surprising accuracy.

Siri used to be available for all iOS devices, but after acquiring the company that made it, Apple quietly pulled it from the App Store and it is now only offered to iPhone 4S owners. If you own an iPhone 3GS or newer device, you can hold the Home button down for a few seconds to access Voice Control, but it doesn’t offer anything near Siri’s functionality.