Posted in Food
Author: Editor  Published Date: September 19, 2012  Leave a Comment on Spanish Foods That You Need To Know

Spanish food has always been a crowd favorite. Though the truth is, most people are often even unaware that the dish they are feasting on and enjoying is a Spanish dish. In fact about 70% of restaurants in every part of the world actually has at least one Spanish recipe published in its menu; it is just that people do not really know these particular menus are of Spanish origin.

Listed below are just a few of the world’s favorite dishes that most people do not even know are of Spanish origin: 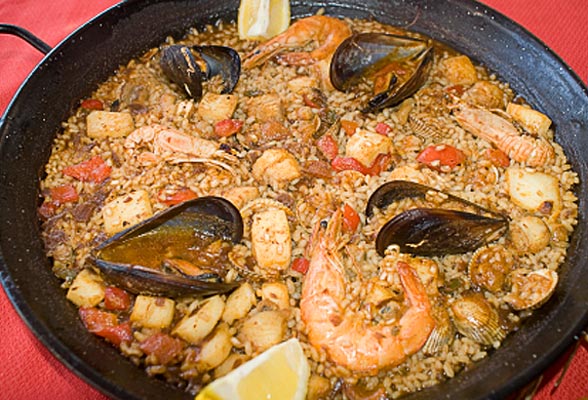 Chorizo – Chorizo is among the most popular Spanish Tapas. Tapas is not a specific dish, it is actually a Spanish word which means “appetizer”. This Spanish recipe uses chopped pork mixed with pork fat; this is seasoned in salt and smoke paprika. Nowadays, the Spanish chorizo has many variations – there are unsmoked, smoked, with or without garlic, herbs, and many other ingredients.

Gambas Ajillo – This is popularly known in dozens of restaurants as “Garlic Prawns”. This recipe is composed of succulent large prawns that are cooked with chili flakes and garlic in olive oil. It is a very quick and easy to prepare recipe. The prep and cooking time only total to 20 minutes.

Calamares Fritos – Now this is yet another crowd favorite in restaurants world over; almost any type of restaurant has this offered on their menu. Calamares Fritos or fried squid, is actually Spanish of origin. These are squid rings that are wrapped in breading, deep fried, and served with either mayonnaise or the classic ali-oli sauce.

Polvoron – Polvoron refer to a type of Spanish shortbread made from flour, milk, sugar, and nuts. It is heavy yet soft and extremely crumbly. Polvorones are traditional sweet treats that are usually popular during Christmas season. However, the traditional and classic Polvorones is hardly the one that is widely available these days. This is because countries like Mexico, the United States, and the Philippines also have their own version for the said sweet treat, and these versions are the ones that are widely used nowadays.

These dishes are just six of the many other well-loved Spanish recipes to date. Truth is, there are really a lot of delightful Spanish entrees that many people do not even know that those dishes are Spanish. Nonetheless, even without knowing that they are indeed eating Spanish food, the point of it all is that Spanish recipes are timeless.

Leslie loves hill walking and writing his routes on the web.  He has been running the main Camino de Santiago and Walking in Scotland site since 2006. He has been travelling for the past years now and has encountered different foods. To know more about Spanish recipes, click on the link.