Steve Vai is considered to be one of the world’s most influential and inspirational guitarists. He began playing at the age of 13, taking lessons from Joe Satriani and subsequently attended Berklee College of Music. His big break into the music business came when he transcribed Frank Zappa’s “The Black Page” and sent it to him with a recording of his own guitar playing.

Zappa loved Vai’s work and recruited him to transcribe further pieces. This led to Vai becoming a member of Zappa’s band in 1980. He left Zappa in 1982 and then recorded his own album “Flex-Able” in 1984. The album was made in a studio at his home in California which he converted from a tool shed! “Flex-Able” was released on a record label established by Vai specifically for this purpose as he thought he would not find another label to take it ! 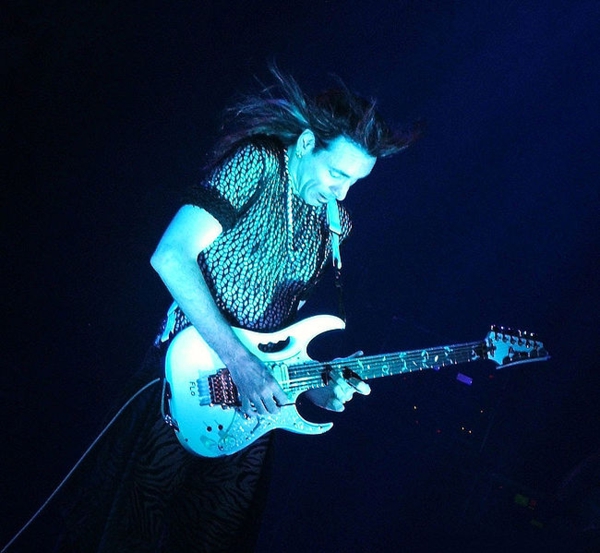 The following year Vai joined former Van Halen superstar David Lee Roth in his new super group the David Lee Roth Band. The first album “Eat ‘Em and Smile” was released to critical acclaim and was a commercial triumph selling two million copies. Vai described his spell with the band as one of his favourite times in his music career and said “It was a hell of a band”. The group were now known as the Eat ’em and Smile Band and released a second album “Skyscraper” which was not so well received by rock fans, despite being a commercial success, as it was much more poppy in style. The group then started to drift apart due to creative differences, finally ending with Vai’s departure in 1989.

Steve Vai joined Dave Coverdale’s Whitesnake in 1989 after the departure of Vivian Campbell. The group then released the album “Slip of the Tongue” with Vai playing all of the guitar parts on the recording due to a wrist injury sustained by fellow band member Adrian Vandeberg. The album was supported with a tour which was well received by the fans. The group then co-headlined the Monsters of Rock Festival. Despite the success of the new line-up Coverdale disbanded Whitesnake in 1990.

During the 1990’s Vai continued to tour with his own band and on occasion with Joe Satriani and David Lee Roth. The song “For the Love of God” from his solo album release “Passion and Warfare” was voted by Guitar World magazine readers as one of the top 100 guitar solos of all time, coming in and number 29. Vai continues to write, compose and perform both as a solo artist and with other luminary musicians. In September 2012 he released “The Story of Light” an album of original material that explores his self-proclaimed lifelong spiritual quest. He once declared “I was always one of those guys who was a seeker after the truth”. Steve Vai has two recording studios and helped design his signature REM range for Ibanez Guitars.

Steve Vai was always open minded as to what music could be. Across his career he has tested the range and mysteries of his instrument and established a unique sound in his recordings and theatrical, flash live performances.

Sally Stacey writes on a variety of subjects including music, technology and travelling. A serial collector of musical instruments, Sally owns one of the signature range Ibanez guitars designed by Steve Vai.