There can be nothing more rejuvenating and awakening to the senses than the hot spray of a quick shower in the morning before work, but unfortunately, if you do not have an electric shower installed, then you may be paying a hefty price for this quick convenience.

Though you are probably only actually in the shower for five to fifteen minutes, your water heater is hard at work 24 hours a day, keeping the water super-heated at all times so that it is readily available to you at the turn of a knob. 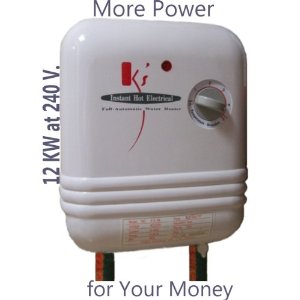 Though the purpose is achieved, this is not a very energy efficient method of operation. It is not uncommon for boilers to be a primary cause of high energy bills in many homes, especially if the boiler is outdated or faulty.

Advantags of Electric Showers
Electric showers are a great alternative to traditional showers, as they can reduce energy usage significantly.  Instead of keeping water constantly heated, they heat only the amount need instantaneously.  Your existing cold water lines are hooked up to its control box, where the proper amount of water can be heated to the desired temperature. Many electric showers have a digital memory that can store specified water temperatures and settings.

Another advantage that an electric shower has over a boiler heated shower is that you never have to worry that the hot water will be used up before you have had a chance to bathe, or that it is suddenly going to go cold on you when you have only just began to lather up. The hot water used while taking an electric shower is not being delivered from a large centrally heated tank that can be emptied and takes a long time to heat back up. This makes an electric shower an increasingly popular option in many busy households, and homes occupied by large families.

Electric Showers can also be extremely handy in remedying situations where there is low water pressure from the shower head. An electric shower is typically equipped with a pumping mechanism that draws the water straight from the cold source. This also makes the electric shower a desirable convenience when you are traveling or camping, depending on the model you choose.

The amount of space saved by choosing to rely on an electric shower solely for your bathing needs is another one of its many benefits. Traditional boilers can be quite bulky in size, which can be especially compromising in very small bathrooms, leaving you with nothing more than a tiny square of navigable space. An electric shower requires virtually no space, and can be installed quite easily on any type of preexisting water heating system.

Phil Turner recently refurbished a downstairs bathroom, which involved a lot of research into electric showers. He opted for one fed from the cold water tank rather than mains-fed to prevent temperature fluctuations when other taps are turned on.