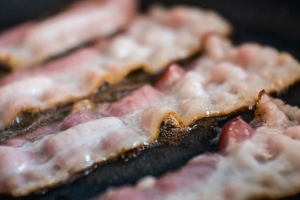 There was a time when almost every kitchen had an old coffee can next to the stove that was only used for bacon grease. And its purpose wasn’t to keep the grease out of the drains. It was used for cooking. Every time that bacon was fried, the grease was added to the can to be used later in the most flavorful ways.

While the cans of bacon grease on the counter seem to be a part of days-gone-by, bacon grease can still be saved in the refrigerator, and that amazing flavor can be used in a lot of recipes. Here are five delicious ways to recycle that amazing bacon grease and be able to savor it more often.

It’s the perfect sweet and salty breakfast combination. The flavor of pancakes can be enhanced by cooking the bacon first, preferably on a flat top griddle, and saving those yummy drippings from the bacon. They can then be used in the pancake recipe in place of vegetable oil, and on the griddle to keep the pancakes from sticking. It’s a good idea to make plenty, as they’ll disappear quickly.

Adding bacon grease to bourbon isn’t a new idea. A regional favorite, it’s very popular in the South. There are a few different versions out there. But it’s basically a relatively simple process of filtering warm bacon grease into bourbon. Used in an old-fashioned, the combination of sweet and salty flavors creates a tasty beverage with a little kick.

Bacon in a Milkshake

The flavor of bacon has even found its way into desserts. Adding a little bacon grease, along with some maple syrup, to a milkshake will create a truly unique taste sensation. Die-hard bacon enthusiasts might even add some warm bacon pieces to top it off.

Bacon grease can also complement the flavor of homemade Chipotle BBQ sauce, carrying on the sweet and salty vibe, while having the spicy kick of the peppers for a little heat. It can either be incorporated into the sauce, or basted on the meat before the sauce is added.

Put some new life into the traditional grilled cheese sandwich by using bacon grease instead of butter. Grill it the usual way, and savor the flavor of bacon in your favorite sandwich. Once you try it this way, you may never again use butter to cook a grilled cheese.

These are just some of the ways that the drippings from bacon can be used. Reusing bacon grease is recycling at its best. It’s not only helping out the environment by not disposing of it (not to mention saving your pipes from requiring a plumber), it’s also a delicious and aromatic way to enhance many of your favorite recipes.