“3:10 to Yuma,” is a 2007 drama, depicting the story of a captured outlaw awaiting a train to attend court in Yuma. A small-town sheriff agrees to take custody of the outlaw as he awaits his ride. It turns into a battle of wits and skill, while the outlaw undermines and overcomes the sheriff. This remake of a classic 1957 Western film, starring Glenn Ford and Van Heflin, commanded audiences across the United States. 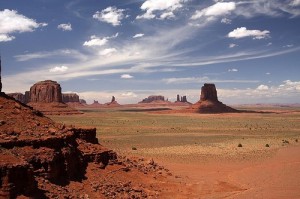 “True Grit,” another remake released in 2010, pays homage to the original mid-Century Western films. The film stars big names like Matt Damon and Josh Brolin. It tells the story of a U.S. marshal who helps a stubborn woman hunt down her father’s murderer. Written and directed by the Coen brothers, it’s not the first, but second, adaptation of an original novel written by Charles Portis back in 1968.

A gripping 2005 film, “The Proposition” tells the story of a well-known outlaw detained by local law enforcement, and given nine days to murder his older brother. If the outlaw fails to comply, law enforcement wil execute his younge, teenage brother. The original screenplay, written by screenwriter and musician Nick Cave, stars Emily Watson, Guy Pearce, and Dan Huston, among others, with John Hillcoat directing. Rife with Western saddles and other historical fanfare, “The Proposition” is a tale of family relationships and struggles.

A ground-breaking film, with ties to both the American frontier and modern issues of sexuality. “Brokeback Mountain” has a roster of major stars including Anne Hathaway, the late Heath Ledger, Jake Gyllenhaal, and Michele Williams. “Brokeback Mountain” won a Golden Globe for Best Picture, and received eight Oscar nominations, taking home three awards.  Thrown together under uncontrollable circumstances, two cowboys share an intimate and forbidden relationship.

The 2003 film “Open Range” gets down-and-dirty with what Western film-lovers truly seek — gun fights and women-stealing. When a corrupt law enforcement official threatens a former gunslinger, he takes up his old habits to defend his family’s honor, and fight for what’s his. Directed and co-produced by the renowned actor Kevin Costner, who also stars in the film, along with Robert Duvall and Diego Luna. The famous Annette Benning also appears in a supporting role.