It wasn’t until I visited the Western United States for the first time that I discovered that not all American black bears (Ursus Americanus) are actually black. In fact they can be several different colours or “phases” and the name black was given to the species simply because the early pioneers who first discovered and named them believed that the bears of other colours were different species.

Black bears are commonly brown, cinnamon and blonde in colour and more rarely white in the case of the Kermode or spirit bear.  Probably the rarest and most striking colour phase is the silver grey of the illusive Glacier or blue bear (Ursus Americanus Emmonsii), which can only be found in northwest British Columbia, the southwest Yukon and the area of south eastern Alaska between Yakutat and the Alsek River.  The unusual colouring is the result of a grey-black undercoat with outer or guard hairs that are white with silver tips. The colouring even amongst blue bears can vary from obvious silver blue to almost brown. 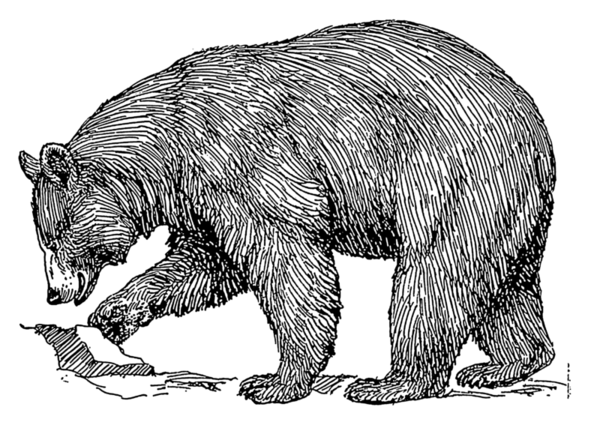 The blue colour phase probably evolved during the last ice age when a group of bears were isolated between the coastline and the advancing glaciers. The blue colour was the perfect camouflage as it is difficult to see against a backdrop of glacial ice. The numbers of blue bears are diminishing and there could be as few as 100 left in the wild. Since the ice melted and the bears could roam freely again they have bred with bears of different colourings and produced fewer blue phase cubs. When blue cubs have been spotted they are often with a mother and siblings of a different colour. The blue phase is a recessive gene meaning that both parents, although not needing to have blue coats themselves, must carry the gene to produce a blue cub in the litter.

It is extremely rare to find a Glacier bear in the wild. There are only a few examples of the species left, they are only found in three areas of the North American continent and the territory is extremely awkward to explore. These areas are rugged, densely forested and remote and are therefore difficult and expensive to reach. If you do decide to go adventuring do be sure to go fully equipped with bear spray, insect repellent, the right clothes, food supplies and a tent or hammock. You might be out there for some time! There are several organisations who lead groups of tourists and hunters in search of the Glacier bear but these are very expensive and rarely successful.

Happily, if you are not intrepid enough to go on an expedition into the wilds of Alaska, you can see a Glacier bear in the Alaska Zoo in Anchorage. Admittedly you are unlikely to be just passing Anchorage but Alaska is a beautiful place to visit and many key areas and sights are easily accessible to tourists. Bear sightings are very common and are always a delight but if you see a blue bear you are fortunate indeed.

If you do go adventuring and need a hammock Westmount Living can help you out!